Should the surgeon do a laparoscopic hysterectomy versus regular surgery in cervical cancer? Notably, cervical cancer can require a complete removal of the womb. This is particularly so when the cancer is growing inside the rest of the uterus. It is important to realize, for years physicians used the older method of a complete hysterectomy through an opening in the abdomen. Only in the last 10 years or so gynecologists introduced the less invasive laparoscopic hysterectomy. In contrast, this method does not require any abdominal incision, only three tiny puncture wounds. At the same time the patient also recovers a lot faster, with less pain. However, in a new study Dr. Alexander Melamed compared 15 clinical trials. The hazard for recurrence or death with the laparoscopic method was 1.71-fold and the mortality risk 1.56-fold. Researchers compared this to the conventional abdominal hysterectomy.

Details of the metaanalysis

In essence, Dr. Melamed and his team looked at a total of 9,499 women with early invasive cancer of the cervix (stage IA and IIA). 4,684 underwent minimally invasive surgery, for 2,675 of these physicians utilized robots for laparoscopic hysterectomies. In other words, the rest of the women received conventional open hysterectomy surgery.

Up to now it was assumed that the cancer behavior would be identical with both surgical methods. But it is important to realize that the study showed this was clearly not the case. Be that as it may, the laparoscopic, minimally invasive hysterectomy had 71% higher hazard for recurrence and death. There was also a 56% higher hazard for death compared to the conventional open procedure.

Dr. Jason D. Wright, a gynecologist from the same department as Dr. Melamed measured the outcome of early ovarian cancer in a separate study. The researchers diagnosed 8,850 women (mean age of 55.6 years) with stage I epithelial ovarian cancer. Between 2010 and 2015 minimally invasive laparoscopic surgery has increased from 19.8% to 34.9%. Dr. Wright said that “removal often requires significant manipulation, which may in turn lead to rupture of the capsule of the ovary.” This is of concern as it can cause spread of the cancer with lower overall survival rates compared to using conventional open surgery. When the surgeons squeeze ovarian masses or ovarian cysts through pinhole laparoscopy openings, the pressure can release cancer cells into the systemic circulation.

The researchers could identify 1,194 women where capsule rupture took place. They followed them for 39.4 months with an overall survival of 86.8% in comparison to 90.5% for  ovarian tumors that had not ruptured with abdominal surgery. This means that 4.2% of women had to die prematurely just because their surgeon chose the laparoscopic method instead of the traditional abdominal surgery. 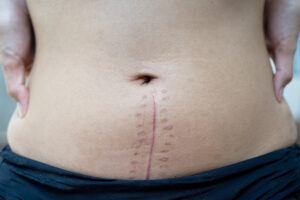 A metaanalysis of 15 clinical trials regarding early cervical cancer showed surprising findings.Physicians treated cervical cancer cases (stage IA and IIA) by traditional abdominal hysterectomy or by laparoscopic hysterectomy. They had different long-term results with cancer recurrence rates being much higher with laparoscopic surgery than in cases of traditional surgery. In a similar clinical trial surgery for early ovarian cancer showed a similar pattern. The laparoscopic surgery led to premature death when the ovarian cyst that contained the cancer ruptured during removal. In the case of cervical cancer, it likely was the intrauterine probe that was the problem. Physicians used this for leverage to remove the cancer through the laparoscopy pinhole. In the process of forcing the uterus and cervix through the hole cancer cells could spread into the abdominal cavity with a result of poor long-term survival statistics and premature deaths.

Final word from the authors of the study

The authors said: “We owe it to patients to study any surgical or medical intervention adhering to the highest standards of clinical investigation,” they wrote. “The short-term advantages of minimally invasive surgery for gynecologic cancers should be weighed against the risks for potentially worse long-term outcomes.”