Let’s assume you have an acidy stomach or stomach reflux; your doctor’s prescription could give you kidney failure linked to acid medication. This is what a new study showed that made headlines recently.

This is based on a study published in the Journal of the American Society of Nephrology.

PPIs have other side effects:

These results were shown in earlier studies.

What to do about kidney failure linked to acid medication?

We know there is a close association. But we do not know for certain that there is causation. In other words, it is an observational study. At this point it does not yet show a causal relationship. It is often that medications that have the desired effect are also having undesirable side effects.  Here the authors suggest that the powerful PPI’s are also having significant side effects. Their suggestion is to use PPI’s only for a short period of time.  The manufacturer also recommends it. If anti-acid medication is required for a longer time, histamine H2 receptor blockers can be used instead. If H. Pylori is involved in a chronic acid problem, the over the counter licorice compound DGL can be used. This is available from the health food store. DGL has been shown to be as effective as histamine H2 receptor blockers. DGL stands for deglycyrrhizinated licorice root. 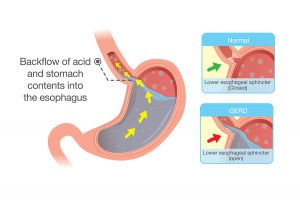 We often do not think about side effects of medication. If we have a sore stomach from too much acid, we are ready to swallow medicine like the PPI’s. When the symptoms have disappeared, we are not too concerned about continuing to swallow medicine. But the side effects of PPI’s can involve kidney failure. This is kidney failure linked to acid medication. It can cause permanent kidney damage. In many cases it may require a kidney transplant down the road. This gives us reasons to be concerned and stop PPI’s as soon as possible. If you are on this medication, discuss it with your doctor!