A new study found that inflammation in rheumatoid arthritis patients affects the brain. First of all, 54 patients with rheumatoid arthritis (RA) were part of this investigation by researchers at the University of Michigan in Ann Arbor. Furthermore, Andrew Schrepf and co-workers did functional and structural MRI scans at baseline and 6 months into the study. In addition, they wondered whether the inflammation of the RA would affect communication within the brain.

The original study appeared in Nature Communications. An excerpt in popular language is here.

The study population was  between 43 and 66 years of age. They had rheumatoid arthritis between 2.85 years and over 20 years.

Many patients with rheumatoid arthritis complain of brain fog. With this they mean that it is difficult for them to think, to concentrate and to learn new things.

The researchers concentrated on 264 brain regions and studied their connections using functional and structural MRI scans of the brains of their subjects. The interesting finding was that there were indeed communication slow-downs between these brain regions.

Two areas of connectivity stood out in the study: the inferior parietal lobule and the medial prefrontal cortex. First of all, the inferior parietal lobule is where visual, auditory and somatosensory stimuli meet in the brain cortex. It is a key area of the brain where visual-spacial processing takes place. Furthermore, the prefrontal cortex is where long-term memories are retrieved and this helps us to make decisions. Research also noted in the study that the connections to 264 brain regions in RA patients showed a slowdown.

Comments by one of the researchers of the publication

Dr. Chelsea Kaplan, an anesthesiology resident said in conclusion: “The findings also demonstrated how inflammation we measure in the periphery may be actually altering functional connections in the brain and  how this plays a role in some of the cognitive symptoms we see in rheumatoid arthritis.” 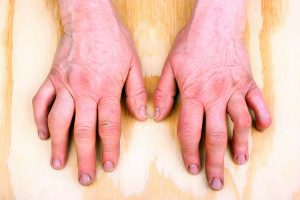 A co-author author, Neil Basu, Ph.D., commented: “This intriguing data supports the idea that rheumatoid arthritis inflammation targets the brain and not just the joints.”