A new study in “Nature” determined that immunity against Covid-19 coronavirus persists longer than expected. It also showed that the antibodies eliminate the South African variants of the virus as well. Researchers did extensive blood tests in 87 individuals at two time points. The first was 1 month after the viral infection started, the second six months after the beginning of the viral infection.

As more and more people recover from severe acute respiratory syndrome coronavirus-2 (SARS-CoV-2) the question is how long the immunity lasts. A new Rockefeller study examined patients’ antibody response 1 month after the start of the infection and again 6 months after the start. In this case, the researchers found that the antibody production had dropped to 20% by 6 months after the start of the infection. But B cell memory concentration was the same as initially. This ensures a prompt antibody production with a second SARS-CoV-2 infection.

The target of the antibodies is the receptor-binding domain (RBD) of the virus. That is to say, the antibodies that the memory B cells produce have greater potency and resistance to RBD mutations. Notably, the researchers felt that there was a continued evolution of the humoral antibody response.

Other studies suggested that perhaps continued presence of SARS-CoV-2 virus in the small intestinal wall or killed virus fragments might explain the continued stimulation of memory B cells. For this reason, the researchers took 14 volunteers and did endoscopic bowel studies. Indeed, in 7 out of the 14 cases polymerase chain reactions revealed persistence of SARS-CoV-2 nucleic acids in the small bowel wall. The researchers of the study think that this is an important finding. It shows that there are mechanisms in place that prolong the immune response.

The researchers consider lungs, upper throat, and the small intestine as potential hiding places for residual viral particles. The nucleic acid of viral particles in these tissues could stimulate the growth of memory cells and make the antibodies even more specific for variants of the original viral strain.

Importance of the integrity of the immune system

Recently the news of a few rare cases of sustaining the SARS-CoV-2 virus twice has made the news. In all these cases it is not known how strong the immune system was. There are 14 factors that need to be in place to have a well-functioning immune system.

The most important supplements the body needs for a strong immune system are vitamin B complex, vitamin D, vitamin C, magnesium, selenium, zinc, probiotics and omega-3 fatty acids. The immune system likely will deal with the SARS-CoV-2 virus the first time around by producing enough memory B cells. They make enough antibodies that kill the SARS-CoV-2 virus, so a second infection does not occur. Similarly, when a person with a strong immune system receives a vaccination against SARS-CoV-2 virus,  the body develops immunity. It makes enough antibodies to protect you and prevent a first and second infection with this virus. 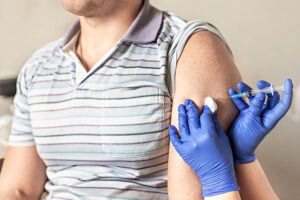 A new study in “Nature” showed that immunity following severe acute respiratory syndrome coronavirus-2 (SARS-CoV-2) seems to last a lot longer than originally anticipated. The antibody production was only 20% at 6 months after the initial Covid-19 infection. But the memory B cell response was the same 1 month or 6 months after the initial infection. Endoscopic bowel studies showed 7 out of 14 cases with positive polymerase chain reactions for SARS-CoV-2 nucleic acid. The memory B cells in the throat, lungs and small intestine appear to get fine-tuned. The exact strain or variant of SARS-CoV-2 virus is what programs memory B cells. This way even viral variants invoke a vigorous immune response when they challenge the body again. The researchers announced that they will do a larger study to look at the immune response after SARS-CoV-2 virus infections.

With a strong immune system, the body can take care of SARS-CoV-2 virus infections.