New research with lymph node biopsies showed that the immune response following the Pfizer vaccine lasts much longer than previously assumed. This publication is based on a research paper date June 29, 2021 in Nature.

US researchers at Washington University School of Medicine in St. Louis did lymph node biopsies under ultrasound guidance. They took some of the biopsies on patients with prior Covid-19 infections (before their first dose of their Pfizer vaccine). Researchers also took lymph node biopsies from 14 subjects who received both vaccinations.

The first samples were harvested just prior to the second vaccine (week 3), the remainder on week 4, 5 and 7, counted from the first vaccine. In all of the 14 samples 3 weeks after the 1st vaccine germinal centers with B cells producing antibodies were observed.

Other studies showed that germinal centers in lymph glands play a pivotal role in antibody production. There B cells (bone marrow processed lymphocytes) in cooperation with T-helper cells produce specific antibodies against a protein. In the case of the SARS-CoV-2 vaccine from Pfizer it is the mRNA of the vaccine. The germinal centers of lymph nodes also contain B memory cells that are important for the continued production of antibodies against certain infections.  There are distinct differences.

For instance, smallpox is one of the infections where one vaccination provides lifelong immunity against this infectious disease. But many other vaccines last only for a few years and booster shots are necessary. This is the case for pertussis, tetanus and diphtheria. With mRNA vaccine like the SARS-CoV-2 vaccine we are still in the learning curve. So far the assumption was that two vaccinations would last about 6 months. There is a difference between the two immune responses.  With a lasting immune response there are memory B lymphocytes that continue to produce B lymphocytes. These produce antibodies, which are missing when the vaccination is short lived. The difference is all about a lack of memory B lymphocytes.

Results of the Nature study regarding the SARS-CoV-2 vaccine 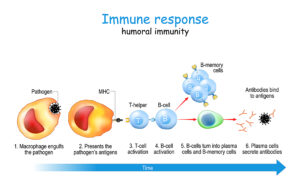