How Does Wildfire Smoke Affect Our Health?

With wildfires burning everywhere the question is: how does wildfire smoke affect our health? Wildfires seem to occur more frequently during the summer and even in fall. The smoke from the wildfires in Northern California has reached the area where I live in British Columbia, Canada. But in the province of British Columbia there are also more than 600 fires burning, many out of control. The Okanagan is located 5 hours inland from Vancouver, BC. A worrisome aspect of this is that the finer particles ascend into the troposphere, the lower layer of the atmosphere where winds can transport them to far-away cities.

Effects of particles from wildfires on people with respiratory diseases

People with respiratory conditions like asthma or chronic obstructive pulmonary disease (emphysema) are very sensitive to wildfire smoke. Particularly the fine particles of wildfire smoke are dangerous. They can enter the airways down to the smallest branches of the respiratory bronchial tree. It is there where a muscular layer surrounds the small bronchioles. These muscular layers get into spasm when fine particles irritate the lining of the airways. The end result is bronchospasm, wheezing and shortness of breath. In order to survive the patient has to take more inhaler medication and sometimes even cortisone to control the inflammation from the fine particles in wildfire smoke.

The environmental Protective Agency has developed an Air Quality Index (AI) that measures the air quality in a certain area. Normally our Air Quality Index(AQI) is in the 25 to 30 ranges, which is good or green. But on Aug. 19 it has deteriorated to 343, which is in the hazardous or purple air quality zone. New Delhi, India had an AQI of 153 (red), while Beijing, China had only 37 (green zone). Many areas in the Western US have Air Quality Indices of more than 100, which is “unhealthy for sensitive groups”. Redding right now has an air quality index of 105. The reason for the high readings in the Okanagan is that there are several fires burning in the northwest of BC and the winds have shifted carrying the smoke to our area.

What to do when the Air Quality Index is poor?

Smoke from wildfires can irritate your eyes, give you a runny nose and make you cough. Stay inside the house. If it is hot outside, run you air conditioner with a clean HEPA filter in place. This filters out fine particular matter. Keep in touch with reports about the cause of the wildfire. You need to have an escape plan, if the fire comes too close. 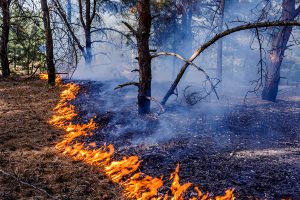 How Does Wildfire Smoke Affect Our Health?

Wildfires are now more and more a part of our lives. There may not be a wildfire burning close to where you live. But it can still impact you through the fine particles that can travel hundreds of miles as air pollution. Stay inside the house and use the air conditioner that usually has a HEPA filter. This ensures that the air quality inside the house is better than outside. Those who have airway diseases are more sensitive to air pollution from wildfires. They may have to adjust their medication to prevent asthma or similar breathing problems.