Household Cleaners Could Cause Obesity In Children

A new study from Canada noticed that household cleaners could cause obesity in children. The study appeared in the Canadian Medical Association Journal on Sept. 18, 2018.

First, paediatricians followed along 757 infants from the midterm of the pregnancy through the after birth years. Second, the researchers inquired about what cleaning agents the mothers used in the home. Finally, they also weighed the children on each follow-up visit. In addition they took stool samples to analyze their bowel flora.

Criticism from the disinfectant industry

It did not take long before there was criticism from the industry. Richard Sedlak, executive vice president at the American Cleaning Institute commented to the study. He said that he was “disappointed at the sensational claims” from the authors of the study. The studies did not include what diet the children were on. He went on to say that proper use of disinfectants would contribute to healthy homes and infection control. Sedlak added: “Proper use of household cleaners and disinfectants are important contributors to infection control and healthy homes.” Moira K. Differding and Noel T. Mueller, both of the Department of Epidemiology at Johns Hopkins Bloomberg School of Public Health in Baltimore, defended the study as biologically plausible. Both had no involvement in the study. 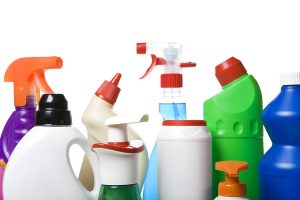 Household Cleaners Could Cause Obesity In Children

What children or adults eat determines what their gut flora will be. It also determines how strong the immune system will be. But in addition children’s weight also depends on whether their mothers clean the house regularly with detergents with bacteria-killing ingredients or not. In this case the study demonstrated that their children were obese at the age of 3. This new study has started a discussion about whether or not it is right to suppress all the bacteria in our environment. The authors indicated that it is wiser to use washing detergents without the bacteria-killing ingredients or use eco-friendly detergents to clean the house. Children who grew up in houses cleaned with natural cleaning agents had a normal weight at the age of 3.