Hot Drinks Can Cause Cancer

I was watching CNN on a mini TV in the gym when I read that hot drinks can cause cancer. This news is based on a news release from the International Agency for Research on Cancer, a subsidiary of the World Health Organization.

Research into why hot drinks can cause cancer

As this question and answer information reveals, intense research into various drinks was done. The question was whether or not they could cause esophagus or other cancers. More than a decade back coffee was accused of being a carcinogen. But larger and more sophisticated trials separated the chemicals in coffee from the temperature of the drink. Surprisingly warm coffee showed no carcinogenic effect. Also, coffee less than 65 degrees Celsius (less than 149 degrees Fahrenheit) was OK. The larger trials failed to show the previous suspicion that coffee would cause bladder cancer.

Coffee got completely cleared of any cancer connection. The only exception was the temperature of the drink. But any drink, like tea or hot chocolate above 65 degrees Celsius (=149 degrees Fahrenheit) was found to be carcinogenic for the esophagus. Heat can lead to scald burns causing inflammation. And chronic inflammation can cause cancer. The National Institutes of Health have published the fact that hot drinks can cause esophageal cancer back in 2009. But now even larger research material has confirmed this finding.

Why hot drinks can cause cancer in different regions

In Europe, Canada and the US restaurants and food outlets serve warm drinks not that hot. However in South America, the Middle East and East Africa habits are different. People like to serve and consume their drinks piping hot, particularly teas. In those regions people usually like to consume their teas with high temperatures, above 158 degrees Fahrenheit (70 degrees Celsius). “This is about 10 degrees Celsius higher than people in North America and Europe like their coffee,” said Dana Loomis. She is the deputy head of the monographs section at the cancer research agency.

Cancer of the esophagus is the eighth most common cancer worldwide. In 2012 400,000 people died from this cancer, which was about 5% of all cancer deaths.

A previous study has shown that a safe temperature for consuming hot drinks is 136 degrees Fahrenheit (57.8 degrees Celsius) or below. 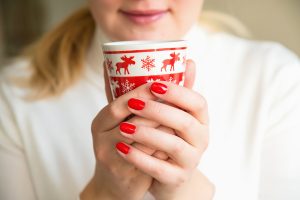 Hot Drinks Can Cause Cancer

A recent review of coffee as a carcinogen found that coffee is not carcinogenic. However, hot coffee or any other hot drink can be carcinogenic to the esophagus. This is so, because of repeated scalding of the lining of the esophagus. High-risk areas for esophagus cancer were found to be South America, the Middle East and East Africa. In these regions people serve teas and other drinks often at higher than desirable temperatures. Keep your tea, coffee or hot chocolate below 136 degrees Fahrenheit (57.8 degrees Celsius). This way your esophagus will be safe. It goes without saying that you should allow soup or broth to cool down first. This way the temperature does not exceed 136 degrees Fahrenheit. Don’t forget that smoking and alcohol overconsumption can also cause cancer of the esophagus.