A new high-tech tool to screen for skin cancer will likely revolutionize skin cancer treatment and mortality. According to this report on CNN, which is based on a report by Nature, image recognition technologies have been applied to diagnosing skin cancers. A research team trained a computer to recognize skin lesions and distinguish between benign and cancerous skin lesions. The high-tech tool is basing its judgement on the difference of the skin lesions’ appearance. Essentially this is what dermatologist do. Sebastian Thrun, an adjunct professor from Stanford University and his team conducted this research. He said that the objective is to provide this computer technology for areas in the world where there are not enough dermatologists.

Development of the high-tech tool to screen for skin cancer

By 2021 there will be 6.3 billion smartphone subscribers. This type of technology as an app is a possible low cost device for remote areas. It will provide access to a reliable diagnostic skin cancer recognition tool. The accuracy of this tool is the equivalent of 21 dermatologists looking at a questionable skin lesion simultaneously. It can easily distinguish a seborrhoeic keratosis, which is a benign skin lesion from a melanoma, the deadliest pigmented skin cancer. It also can recognize other forms of skin cancer like squamous cell carcinoma or basal cell carcinoma from harmless, benign skin lesions. These may be a compound nevus or a hemangioma. But the computer system will also identify an actinic keratosis, which is a precursor to basal cell carcinoma. An actinic keratosis requires close observation, or it is even better that a physician removes it early.

In order to develop their database, the researchers fed the computer an extensive dataset of 129,450 images, which represent more than 2,000 skin diseases. The images originated from 18 doctor-generated websites in addition to an image library from Stanford University Medical Center. Instead of using a dermatoscope, an expensive amplification tool that dermatologists use, the researchers stuck to the use of a cell phone. This is universally available. The computer program is able to get the same kind of detailed information from cell phone images that a dermatologist does with the use of a dermatoscope.

The only proviso at this point is that this system has to be clinically validated in a clinical practice setting. But after this is done, the app can be available for general use.

The reason that is big progress, is the following: melanomas, the most deadly of skin cancers represent only 5% of all skin cancers. But melanomas are the reason why nearly 75% of patients with this cancer die. It is usually due to delayed diagnosis of melanomas, a skin cancer type that metastasizes early. After early detection of a melanoma the 5-year survival rate is 99%. If it is detected in its late stage, the 5-year survival rate drops to only 14%. When you diagnose skin cancer early, you likely detect it at an earlier stage (stage I) with a better survival rate. The computerized diagnostic app can make a huge difference in survival from skin cancer. 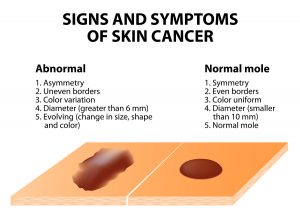 Stanford University Medical Center developed a new diagnostic tool to detect skin cancer early . The information contained in this database is the equivalent of the knowledge of 21 skin specialists (dermatologists). Researchers still have to validate this high-tech tool in a dermatology practice setting. After completion of the validation this tool is available to use used anywhere in the world to diagnose skin cancer early. This will allow for much earlier intervention and surgical removal of skin cancer. The end result is a much better survival of patients with skin cancer.