All of the 14 most popular beer brands in Germany tested positive for glyphosate. This is the active ingredient in Monsanto’s herbicide called “Roundup”. For 500 years there were only 4 allowable ingredients in Germany’s beer. This has been hops, malt, yeast and water. But the Munich Environmental Institute determined there was more in beer. The 5th component was glyphosate. In some beers glyphosate reached almost 30 micrograms per liter of this herbicide.

The World Health Organization has labeled Glyphosate as a probable carcinogen.

How did harmful glyphosates in German beer get there?

It’s not the water, it’s not the hops or yeast. It is likely the barley that was imported from Dakota, US. Malted barley is needed to make beer.

Beer makers noted that there were problems.  Higher concentrations of glyphosate interfered with the malting process. For 500 years there were never problems with malting barley. But now with the imported barley from the US this has changed.

Dr. Don Huber is a professor emeritus of plant pathology. He worked at Purdue University in the past. He noted that Abraxis test strips were in short supply. They were used to test materials for glyphosate residue. Every shipment of barley coming from North Dakota had to be tested for glyphosate. Barley in the US is a crop that is heavily sprayed with glyphosate. This wilts the barley crop. Glyphosate is a systemic herbicide. It is taken up by the plant and moves to the growth points. When the plants are treated just before harvest the herbicide moves into the seed. This explains the high concentration of glyphosate in barley seeds. The Environmental Protection Agency (EPA) helped the farmers. It simply increased the herbicide tolerance levels in their tables. This protects the agricultural industry, but not the consumer.

There never has been a trace of glyphosates in German beer. Until now. This made for huge headlines in the European press. How could there be glyphosate in the food chain? Europe did not allow GMO crops!

A few findings were interesting in that regard: 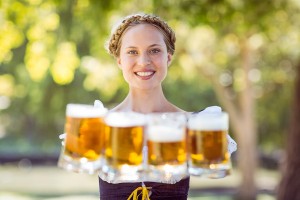 It started as an innocent sideline finding of glyphosate in German beers. Now this turned into a carefully documented story of food contamination. And this in European countries that are opposed to GMO and glyphosate! Germans will likely grow their own barley again. They will want to cut down on GMO crops contaminated with glyphosate. I suspect that the demand for “Bio-Nahrungsmittel” (organic food) will be higher in Europe in the near future. Is the only way to get away from glyphosate contamination. I am noticing the same trend in North America and Canada. The anti-GMO forces are growing.