Hardening Of Arteries Reversed With Supplements

A meta-analysis in the Journal of Nutrition from August 2014 indicates that hardening of arteries can be reversed with supplements. Ammar Ashor and colleagues took 20 randomized trials including 1909 subjects aged 22 to 63. Arterial stiffness was measured by pulse-wave velocity or similar methods. There were subjects who took vitamin C only, vitamin E only or a combination of vitamin C and E. Other groups added mineral supplementation or were only on mineral supplementation.

The result was that arterial stiffness was significantly reduced in those who were taking both vitamin C and E as supplements. This effect was even more pronounced when vitamin C and E blood levels were low before supplementation was started.

The authors concluded that the powerful action of both vitamin C and E as antioxidants would counteract the effects of free radicals on the structural and functional components of the arteries. They concluded that by inactivating free radicals vitamins likely reduced inflammation and protected the integrity of the arterial walls. Vitamins also increased free nitric oxide, which has anti-inflammatory and arterial wall relaxing properties.

What was not mentioned in this study was the telomere lengthening quality of vitamin C and E that very likely also plays a big role in the countering of the hardening of arteries.

As this link points out magnesium supplementation is also an important factor for relaxation of arteries. 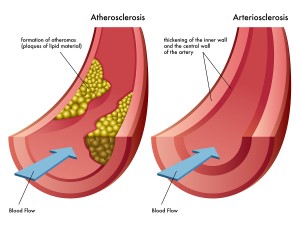 Hardening Of Arteries Reversed With Supplements

More information about hardening of the arteries (arteriosclerosis): https://nethealthbook.com/cardiovascular-disease/heart-disease/atherosclerosis-the-missing-link-between-strokes-and-heart-attacks/