Hair Dyes and Straighteners May Cause Breast Cancer

A new study in the US showed that hair dyes and straighteners may cause breast cancer. The study was conducted by researchers at the National Institutes of Health and published on Dec. 4, 2019.

Details of the breast cancer study

1.  Frequency of applications is important as well. Black women who dyed their hair every 6 to 8 weeks, had a risk of 60% to develop breast cancer than black women who did not dye their hair.

2. This study was a “sister study” where the applicant’s sister had a history of breast cancer. However, the applicant was cancer-free. We know from other studies that immediate female relatives have double the risk to also come down with breast cancer.

3. The hair dyes contain mutagenic and endocrine-disrupting properties such as aromatic amines that could cause breast cancer. 2,4-diaminoanisole sulfate and para-phenylenediamine were causing tumors in the mammary glands with rat experiments.

6. In contrast, when white women applied light-colored permanent dye, the breast cancer risk was only 12%. White women applying a dark-colored dye had a risk of 4%.

The American Cancer Society is aware that hair dyes can cause cancer. But the agency states that it is not clear what ingredients of hair dye cause cancer. Bladder cancer, leukemia, breast cancer and a few other cancers have a link to the use of permanent hair dyes. But researchers have not been able to find a causal agent that they can hold responsible for these cancers. The study here showed a strong association of the hair chemicals to the development of breast cancer. But the authors stated that they cannot conclude that this is a causation. Researchers would require a prospective and random clinical trial to answer the question of causation. However, it is unlikely that such a trial would ever be organized. 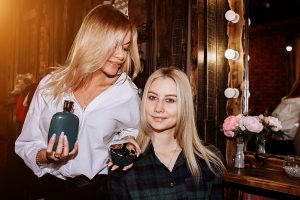 Hair Dyes and Straighteners May Cause Breast Cancer