Grilling Can Be Hazardous

Every summer a few people are seen in the emergency department of a hospital, because grilling can be hazardous. It is not uncommon that patients show up at the emergency after a BBQ, when they ate a hamburger or steak and felt a stinging pain in their mouth. On examination the physician finds a wire bristle stuck in the gums or in the roof of the mouth that needs to be removed under a local anesthetic.

This sounds bad enough, but in one of the cases things were more complicated. A girl enjoyed a BBQ, and she noticed abdominal pain only days later. She remembered seeing a relative cleaning the barbecue with a wire bristle brush. She did not notice anything when she ate a hamburger that was cooked on the grill. Only one week later she developed a sharp pain in her abdomen. The doctors had to give her a general anesthetic, used laparoscopy and pulled out a wire bristle from her abdomen during her surgery. It had perforated her colon and led to the sharp abdominal pain. Grilling can be hazardous. This case was later published to remind physicians that these more rare cases should not be forgotten.

Between 2002 and 2014 there were 43 cases in the electronic surveillance system of about 100 emergency departments in U.S. hospitals. This translates to about 1,700 grill brush injuries nationwide in the US from 2002 to 2014 or 130 grill brush injuries per year on average. Dr. C.W. David Chang, associate professor of clinical otolaryngology at the University of Missouri, stated that this is not as bad, when compared to other injuries: about 5,000 batteries per year are swallowed. 40% of grill brush injuries are below the age of 18; adults age 19 to 40 make up 30% of the cases. Most of the cases happen in July at the height of the barbecue season. Grilling can be hazardous.

The best prevention is to abandon the use of BBQ wire brush cleaner. Use general-purpose scrubbing pads instead, the one that you use for cleaning pots. Use elbow grease and cleaning agents and diligently clean it. It may take a little longer, but it can be done without a wire brush. 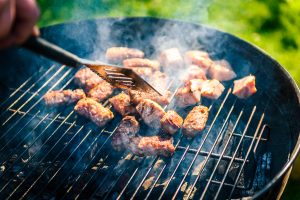 Grilling Can Be Hazardous

Swallowing metal bristles from having cleaned a BBQ with a wire brush is dangerous. It is much safer to clean a BBQ with a general purpose scrubbing pad instead, the one that you use for cleaning pots. During the BBQ season in July patients with bristle injuries often present in the emergency room of hospitals. The injuries are either in the gums, the palate or even further down in the gastrointestinal tract. It can be very cumbersome to identify such a foreign body and to remove it safely. Always think prevention rather than having to depend on the use of emergency medical procedures to identify and remove a bristle that was used to clean a BBQ. Such a metal bristle can get imbedded in food and is eaten. It does not make for an enjoyable BBQ.