They found further that sirtuin 3 (SIRT3), an important mitochondrial redox modulator, is involved by catechins of green tea. It damages the energy producing sub particles, called mitochondria of oral cancer cells. But at the same time it strengthens the mitochondria of normal oral mucosa cells. Sirtuin 3 seems to strengthen respiration and decreases the development of harmful free radicals in normal cells. The opposite is true for oral cancer cells. According to these researchers EGCG selectively turns sirtuin 3 of cancer cells off, but in normal cells EGCG turns sirtuin 3 on. The end result is that in the presence of EGCG tumor cells self destruct and normal cells are strengthened.

The lead researcher stated that green tea catechin (EGCG) is an effective agent that can kill cancer cells, but leaves normal cells unharmed. This is a very important new discovery. Conventional chemotherapy would also stop rapidly dividing hair follicles, gut cells and bone marrow cells. This in turn would cause the usual side effects of hair loss, gut side-effects and infectious diseases. None of this happens with green tea catechin (EGCG). Heere cancer cells are selectively destroyed, but normal cells remain functioning and even get strengthened. 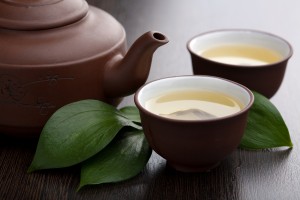 Green tea extract is an established natural substance. But now it has been found that green tea extract kills oral cancer cells. It does not have the usual side effects that chemotherapeutic agents have. Yet it seems effective in killing oral cancer cells. Fortunately for the patient the normal cells stay unharmed. As a result there are no stomach upsets, there is no loss of hair and no immune suppression. Green tea extract may also be effective against other cancers. Further ongoing research will investigate this.