Gram-Negative Bacteria in the Gut Can Cause Cavernous Angiomas

Details of study in Nature Communications

All patients had stool examinations with a technique called “metagenomic shotgun sequencing analysis”. This is an advanced genomic analysis of stool samples. The authors could determine whether the gut bacteria were Gram-positive or Gram-negative. They also could identify the mix of various gut bacteria types. To their surprise there was a clear correlation between a mix of gram-negative bacteria of patients who had cavernous angiomas in their brain arteries versus controls who did not.

The researchers also determined that 5 Gram-negative gut bacteria were involved in causing cavernous angiomas (Bifidobacterium adolescentis, Bacteroides eggerthii, Bacteroides dorei, Dorea, and Escherichia coli). The researchers used information from MRI scans of the brain and genomic analysis of stool samples in the same patient. This way they could predict who was at a higher risk of bleeding from a cavernous angioma and who was not. When the bowel flora consisted of Gram-positive bacteria there was no risk of developing cavernous angiomas.

There were three types of Gram-positive gut bacteria that were particularly protective (F. prausnitzii, B. adolescentis and other Gram-positive species). When they were present in the gut flora, the gut was protected from inflammation. On the other hand, the Gram-negative species O. splanchnicus caused gut inflammation. Apart from causing cavernous angioma it has been implicated in causing other neurological disorders as well. 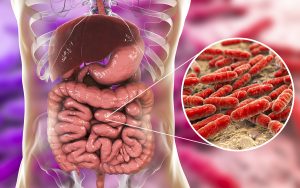 Gram-Negative Bacteria in the Gut Can Cause Cavernous Angiomas

A relatively rare arterial malformation of the brain, cavernous angioma, can cause brain hemorrhage, seizures and deterioration of mental functioning from scarring. A new study published in Nature Communications in May 2020 compared 122 patients with cavernous angiomas to 27 controls. Radiologists identified the lesions by MRI scans. The researchers analyzed stool bacteria in the same patients. For this they employed “metagenomic shotgun sequencing analysis”. This is an advanced genomic analysis of stool samples. The researchers were able to show that cases who developed cavernous angiomas had Gram-negative bacteria in their stools. Controls without cavernous angiomas had Gram-positive stool bacteria.