The researchers repeated the baseline measurements again after 8 weeks. There was a reduction regarding serum levels of CRP (p value 0.018) and TNF-a (p smaller than 0.001) for the garlic group. In addition, pain intensity, tender joint count, disease activity score, and fatigue were all significantly lower than in the control group. The p values for all were less than 0.001, which means highly significant improvements. None of the placebo control patients showed any improvements. The count of swollen joints showed a significant decrease for the garlic group (p value less than 0 .001), but there was no decrease for the placebo group (p value 0.123). The erythrocyte sedimentation rate showed no significant changes.

The authors commented that allicin and diallyl sulfide were the two known substances in garlic that have anti-inflammatory effects. They may also protect against destruction of joint cartilage.

The investigators concluded that garlic extract can be a valuable supplement along with regular medication against rheumatoid arthritis.

Another study regarding garlic supplementation

In April 2020 a randomized, double-blind, placebo-controlled trial was published about the effects of garlic on women with rheumatoid arthritis.

The analysis included 62 patients. Serum levels of total antioxidant capacity showed an increase in the women who were on garlic extracts. They had received 500 mg garlic extract twice per day for 8 weeks. Malondialdehyde, which is a measure of oxidative stress was significantly reduced when compared to the placebo group.

Pain with activity reduced in the garlic group, but not in the placebo group. Quality of life had increased at the end of the trial in the patients that had received the garlic supplement. 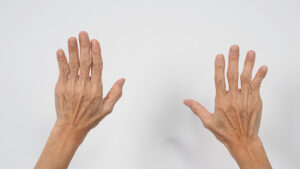 Two similar clinical trials showed that 500 mg of garlic extract taken twice a day improved the condition of patients with rheumatoid arthritis. The first study documented that inflammatory markers in the blood improved with garlic. But it also showed that the improvement of the count of swollen finger joints. The second study showed an increase of the total antioxidant capacity in blood serum in patients who received garlic, but not in the placebo group. Malondialdehyde is a measure of oxidative stress. It showed reduction with the group of rheumatoid arthritis patients who took garlic pills in comparison to the placebo group. The patients who received the garlic supplement had significantly less pain in their finger joints. Both studies demonstrated that garlic extracts can be a useful supplement alongside regular medication against rheumatoid arthritis.