A study about fish consumption in pregnancy and mercury exposure to pregnant women and their children from the Republic of Seychelles showed that mercury in fish is less worrisome than was assumed in the past.

1265 mother-child pairs were enrolled in this study (Ref. 1). Seychelles Islanders consume fish at a much higher rate than in the US. Maternal blood samples were taken at 28 weeks of gestation and analyzed for polyunsaturated fatty acids. At the same time hair samples were obtained for mercury analysis. This allowed assessing prenatal methyl mercury exposure. The children were examined at 20 months with respect to communication skills, behavior and motor skills.

There was no association between methyl mercury exposure from prenatal fish consumption and neurodevelopmental outcomes. The authors are of the opinion that the benefit of fish consumption may outweigh or mask the potentially negative effect of mercury.

There is another study from Hawaii that looked at the protective effect of selenium on the toxic effect of mercury (Ref.2). The group of women who ate no fish during their pregnancy had the lowest mercury content in placental tissue and cord blood. Otherwise the data did not show a clear dose-relationship between the intake of selenium or fish and the mercury levels in placental tissue and cord blood.

In a third study from Europe involving 17 countries mother-child pairs were also studied (Ref.3). This study involved 1799 such pairs. Fish consumption during pregnancy was recorded. Hair analyses on both mothers and babies were done. There was a close correlation between mercury levels of mother and child. Interestingly fresh water fish contributed to the overall mercury load only to a minor extent. 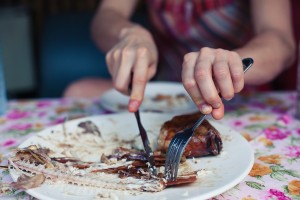 According to Ref. 2 the United States government agencies recommend no more than 340g (12oz) per week of seafood consumption during pregnancy. This is a good baseline figure to adhere to.

It is still prudent to stick to fish that is less contaminated with mercury and other heavy metals. Choose salmon, cod, sardines and mackerel, but stay away from tuna, which is a predator fish and higher in methyl mercury content. Other fish extremely high in mercury are the “big guys” like swordfish, shark, sablefish and orange roughy.