Extracellular Vesicles Can Revive Tissues after a Heart Attack

Surely, a new approach to investigating organ damage has shown that extracellular vesicles can revive tissues after a heart attack. Specifically, researcher from the Harvard John A. Paulson School of Engineering and Applied Sciences used a unique tool to investigate this. It is important to realize that they developed an organ-on-a-chip technology for the heart.

Notably, with this technology multiple processes can be studied at the same time. Specifically, the researchers induced 3 hours of oxygen restriction and followed this up with 90 minutes of reoxygenation. They measured what percentage of heart cells died and measured the contractile force of the heart cells. In one experiment the heart-on-a-chip was pretreated with endothelial-derived extracellular vesicles (EEVs). In this case there were half as many dead heart cells and the contractile force was 4-times higher than in untreated controls. Injured heart cells recovered much faster when EEVs were added. Also, in the presence of EEVs, but in the absence of oxygen heart cells continued to contract as if nothing happened. The scientists analyzed the proteins produced in the treated heart cells versus untreated controls and found them very similar. The EEVs have a powerful protective function.

EEVs have also been termed exosomes in that past

I have reviewed how exosomes can help regenerate the body. Exosomes are particles shed by stem cells. However, the lining cells of the blood vessel walls also shed particles, called endothelial-derived extracellular vesicles, which are identical to exosomes. These nano-sized particles contain the proteins and factors necessary to help organs in trouble to survive. In the case of the experiments described above it is the heart.

It is usually a lack of oxygen from a clot in a coronary artery that is responsible for a heart attack. The blood circulation can be re-established by an urgent bypass surgery or endoscopic heart catheterization and stent placement. But we know from studies that an ischemia-reperfusion injury or reoxygenation injury can occur after a period of ischemia. A tissue injury like this involves various mechanisms like calcium overload, oxidative stress, mitochondrial damage and more. This is where the EEVs that originated from ischemic blood vessel lining contain just the right mixture of chemicals.  The EEVs support the injured coronary blood vessels from the ischemia-reperfusion injury. The experiments with the heart-on-a-chip technology supported this viewpoint. 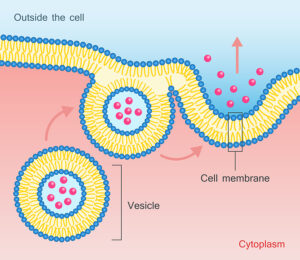 Extracellular Vehicles Can Revive Tissues after a Heart Attack

A new technology, called heart-on-a-chip has already provided valuable insights. Researcher from the Harvard John A. Paulson School of Engineering and Applied Sciences examined simulated heart attacks. They found that pre-treatment with endothelial-derived extracellular vesicles (EEVs) improved recovery from a heart attack. These tiny particles are shed from the cells of the lining of arteries. They are similar to exosomes. These nano-sized particles contain the proteins and factors necessary to help a heart in trouble to survive. Multiple experiments with the heart-on-a-chip have confirmed this. The authors of the study hope that out of this research new drugs may evolve that can trigger the release of the endothelial-derived extracellular vesicles. This medication would be life-saving to patients who suffered a heart attack.