Effect of Smart Phones and Social Media on Teenagers

In Ontario, Canada the effect of smartphones and social media on teenagers was investigated in a study published on February 10, 2020.

According to this study serious mental distress increased from 24% in 2013 to 39% in 2017. Between 2009 and 2014 hospitalizations for suicide attempts in girls increased by 110%. Suicide is the second leading cause of death among youth. In the US the use of smart phones among the youth has increased to 89%, which means it more than doubled over a 6-year period. 70% of teenagers use a smart phone several times per day, which is much more than 33% in 2012.

Findings of the 2020 Ontario study

Here are the findings that the 2020 Ontario study revealed.

Can teenagers become addicted to social media and can it affect their mental health?

One study reported an association between Facebook use and compromised well-being.

There is no standard or agreed-upon definition what smartphone or Internet addiction would be. Despite this there is a study that examined this problem.

This publication reviewed several studies. Researchers identified a large number of participants to have addiction to the internet and social media. The depressed individuals sought websites with self-harm or suicide content. The participants pointed out that there was potential for isolation reduction and for outreach. The Internet can also be a source of help and facilitate students with depression to find therapy. The participants used social media like Facebook to express depressed and suicidal thoughts.

Can time on smart phones and on the Internet affect mental health?

A study examined whether or not time on social media and on the Internet would result in depressed feelings. The result was that using electronic media for more than a few hours per week can undermine self-reported happiness, life satisfaction and self-esteem. On the other hand, in-person social interactions, reading print media, engaging in sports or exercise are what builds up self-esteem. In addition, doing homework, involvement in religious services or working at a job where you receive a salary also correlates positively with psychological well-being.

Can sleeplessness from social media use affect mental health?

Researchers found in a US study that 40% of adolescents who overused the Internet slept less than 7 hours per night. A longitudinal study involving 1101 adolescents showed that loss of sleep because of the use of social media started a depressed mood. There was also a decline in self-esteem. Other studies noted that depression and anxiety often go hand in hand in adolescents who are sleep-deprived. 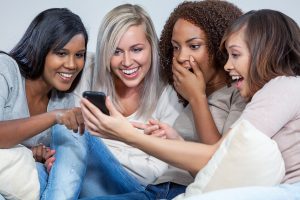 Effect of Smart Phones and Social Media on Teenagers

Adolescents are using social media much more now than in the past. This involves various electronic tools like computers and smart phones. Adolescents often overuse social media and it affects how many hours per night the adolescents sleep. When sleep time is less than 7 hours per night, depression and anxiety can set in. It is important for parents and physicians to spot these troubles early. Counseling could likely reverse the situation before it is too late and suicidal behavior sets in. At a later stage it is more difficult to intervene. A treatment plan can incorporate cognitive/behavioral therapy and a certain degree of cutting back on the use of the computer and the smart phone. Other activities like sports, gym, reading books and socializing with people are also valuable adjuncts of treating depression.