In Puget Sound, Washington researchers found drugs in salmon. Juvenile Chinook salmon were tested for toxic compounds. The surprising fact was that researchers could find antidepressants, Tylenol, OxyContin, Benadryl, Prozac and Aleve (arthritis medication). Researchers  could demonstrate many other drugs in the tissues of the fish. Outfalls of sewage-treatment plants often flow into the mouth of rivers near the ocean. But samples taken from the water of sewage treatment plants revealed more drugs. A surprising 81 different drugs and personal care items were present in fish tested for it. 45 of the fish tested showed high concentrations. Other drugs in salmon tested positive for Valium, Zoloft, Tagamet, Darvon, Nicotine, caffeine, fungicides, antiseptics, anticoagulants and antibiotics. These are not normal compound for fish to have in their system.

What do drugs in salmon mean?

Jim Meador, an environmental toxicologist at NOAA’s Northwest Fisheries Science Center in Seattle said: “The concentrations in effluent were higher than we expected. We analyzed samples for 150 compounds and we had 61 percent of them detected in effluent. So we know these are going into the estuaries.”

The researchers were not concerned about safety of humans consuming the fish, but they were concerned about the fact that the fish that are contaminated with human drugs die at twice the rate than fish in other locations.

According to other studies about 97,000 pounds of drugs and chemicals enter Puget Sound every year. This is a man-made problem requiring human attention to remedy it. 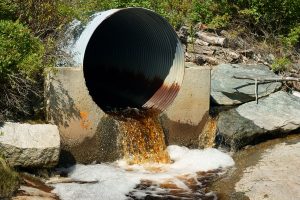 Pollution is not only about lead and mercury. Human drugs and other chemicals can also pollute the oceans, particularly in the mouths of big rivers that spill into the oceans. Rivers often carry the effluent of sewage plants. New ways of filtering out these chemicals and drugs need to be found to make oceans safe again. This will take decades to develop, but should be pursued as a legacy to our children and grandchildren.