We all had the experience that we dropped food, but is dropped food contaminated? This is the question that a group of microbiologists from Rutgers University, New Jersey asked themselves. There is a saying called the 5-second rule. This suggests that eating food from the floor is safe, as long as it is picked up within 5 seconds. A new study, however, says otherwise.

Under the lead of Professor Donald Schaffner they planned several controlled scenarios. They dropped various foods and picked them up after various intervals, then measured the bacterial contamination.

The test type bacteria they used were Enterobacter aerogenes, a distant relative of Salmonella. The test bacteria were spread onto the four different surfaces and were allowed to dry. Then they dropped the various food samples for various length of time.

Is dropped food contaminated? Results of the experiments

The investigative team found that watermelon had the most contamination while gummy candy had the least. The bacterial transfer was dependent on the moisture content of the food. Longer food contact times resulted in higher bacterial transfers.

Compared to tile and steel carpet had a lower bacterial transfer rate. The transfer rate from wood was variable. 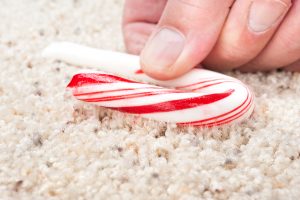 The so-called “5-second rule” where you think it is safe to pick up dropped food, if you pick it up within 5 seconds, is not true. The experiments of this research paper have disproven it. Be aware that 1 in 6 people in the United States get sick each year from food-borne illness. This translates into 48 million people. Of these 128,000 are hospitalized. A total of 3,000 people die every year from food-borne illnesses. It is not worth the risk, so discard food, if it falls on the ground!