Dog Licks May Not Be Harmless

Recently there have been several reports that show that dog licks may not be harmless. Harmless appearing dog licks turned into a serious disease. Even puppies can transmit bacteria that can cause diarrhea in its owners.

The first story I am reporting on concerns puppies that transmitted Campylobacter infections to its owners.

People had diarrhea and felt sick, but nobody died.

The second report is more serious, as another form of infection caused a man to lose half of his nose, both hands and both feet, but he survived.

Diseases we can get from puppies

In August 2017 the department of health of Florida recorded 6 cases of Campylobacter infections linked to a national pet store chain. They reported this to the Center for Disease Control (CDC). An investigation showed that this mini epidemic in 18 states affected a total of 118 people. Symptoms consisted of abdominal pain, fever, diarrhea and vomiting. 29 store employees became ill between Jan. 5, 2016 and Feb. 4, 2018. 99% of these people had touched puppies from a pet store. The dogs had been fed raw or undercooked poultry, unpasteurized dairy products and contaminated water, all proven to contain Campylobacter bacteria. In many cases stool samples grew resistant Campylobacter strains. No deaths occurred among the 118 people affected. But 26 ended up in hospital where they were given rehydration with intravenous fluids.

Mouth bacteria of dogs can cause serious skin infection in man

A 48-year-old man went to the hospital feeling really sick. His face was red and blue. His arms and chest were changing color too. Doctors discovered a type of bacterium in his blood that normally only occurs in the saliva of cats and dogs.

The bug is called Capnocytophaga canimorsus, a normal bacterium in the mouths of dogs and cats. But in humans it can cause serious illness. This man had developed sepsis, and as a result his blood was forming clots. They affected his nose, both hands and both feet. The doctors had to amputate his feet and hands as well as half of his nose to save him from death. Once the antibiotics took effect, the fever disappeared very quickly and his blood clots disappeared, which saved the rest of his body from destruction.

Wash your hands with soap and water

When a person has scratches in the skin these mouth bacteria from pets can enter into the circulatory system. If the immune system is weak as it can be in older persons and children, these bugs can spread faster. Overall this is a rare case, but one needs to think of washing one’s hands with soap and water after petting a cat or a dog. 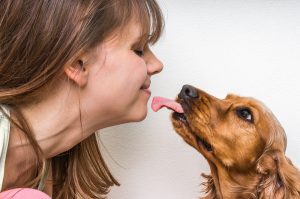 Dog Licks May Not Be Harmless

More than 2/3 of US residents keep pets. We need to be aware that pets can make us sick, if we do not take precautions. Don’t feed your pets contaminated food, as the bugs can multiply in the pet and make you sick (as in the case of Campylobacter that I discussed). But pets also carry mouth bacteria that are harmless for the pets and can be occasionally quite bad for humans, if they enter through open sores or scratches under the skin surface and travel into the blood stream. Always remember to wash your hands after petting your cat or dog. It is also important to remind children that it is important to wash their hands. Pets can be great four-legged friends, and most of the time we can live peacefully side by side with our pets. But following basic hygiene rules remains important!