More details of the study

Specifically, there were 235 subjects that entered the trial. They rated smells they were exposed to as pleasant or unpleasant. There were differences between individuals in each group. But there were also agreements as to what was a pleasant or unpleasant smell. Many agreed that the scent of vanilla or peaches was pleasant. On the other hand, people perceived isovaleric acid as much worse. This is contained in some cheeses, apple juice, soy milk and stinky feet. The researchers were from many countries, the nine study groups were represented different lifestyles, like hunter-gatherers, farmers and fishers.

Co-author Artin Arshamian, a lecturer in clinical neuroscience at the Karolinska Institute in Stockholm stated: “Since these groups live in such disparate odiferous environments, like rainforest, coast, mountain and city, we capture many different types of ‘odor experiences’ “.

The olfactory pathway behind the sense of smell

Discussion of the Karolinska Institute study

Despite the diversity of the study population researchers found that two major factors determine the sense of smell. The molecular structure of an odor is a very specific sensation that the olfactory system identifies. But the other component is the personal experience with a smell. This leaves specific memories that the person immediately recalls when he/she encounters this smell again. 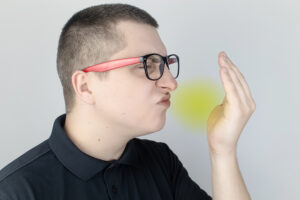 The Karolinska Institute conducted a study to determine whether despite personal preference for good smells molecular structure matters. They found that both the molecular structure of an odor and the personal preference matter when it comes to experiencing smell. We associate our memories to good and bad smells with certain experiences we had in the past. Most people associate the scent of vanilla or peaches as a pleasant experience. On the other hand, most people perceive isovaleric acid, which you find in some cheeses, apple juice, soy milk and stinky feet as a negative experience. Accumulating smell experiences is a lifelong process. In animals scents can be life-saving, in humans it is mostly to avert negative experiences or to augment a pleasant one.