There are patients for whom nothing worked. They had received various antidepressants, but there was no response. This is called “treatment-resistant depression”. Surprisingly there is an alternative, a depression treatment without pills, namely repetitive transcranial magnetic stimulation. You need the proper machine to do this with experts who are running it. This is the case at the Centre for Addiction and Mental Health (CAMH) in Toronto, Ont.

Tom Churchill, a 67-year old retired executive from Toronto had treatment-resistant depression all his life. He heard of repetitive transcranial magnetic stimulation and received treatment by the Toronto team. “It was a 20-day round of treatments, and on the ninth day I walked out, and the world had transformed,” said Churchill. This treatment modality has been in clinical use since 1996. But at CAMH in Toronto they are continually learning how to increase the responsiveness to this treatment. At the present time they have a treatment success rate of 30%. Dr. Daniel Blumberger, the medical director of the repetitive transcranial magnetic stimulation team said: “We’re studying new ways to deliver the treatment and how to improve it. “ He added that he hopes to achieve about 60% treatment successes or beyond with further modifications.

Other depression treatment without pills

There is the older depression treatment without pills, called electroconvulsive therapy (ECT). You may remember this from the movie “One Flew Over the Cuckoo’s Nest”. However, this is much harsher and has problems of memory loss. Repetitive transcranial magnetic stimulation is much more gentle and has none of these side effects. Apart from these methods cognitive/behavioral therapy has been as effective as antidepressant therapy in treating depression.

In the meantime Tom Churchill is all smiles that he has finally received a cure  of his more than 50-year old endogenous depression without pills. 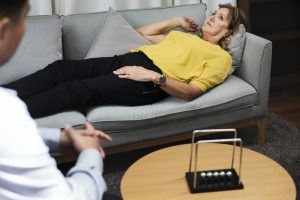