In 2011 Dr. Taylor from Newcastle University showed in a group of diabetes patients that he could cure diabetes permanently with an extremely low calorie diet. The trial was simple: he took overweight or obese patients with diabetes and put them on a starvation diet of 600-700 calories per day for 8 weeks. He found that quite a few of his patients were cured of diabetes. However at that time he neglected to follow these patients up to see whether or not the effect of curing diabetes would last, so he could not really make the claim yet that this cure was permanent.

Cure Diabetes Permanently, with a follow-up of six months

In a new trial published in 2016 using 30 volunteers who were diabetic Dr. Taylor repeated this experiment. Again he gave these volunteers 600-700 calories per day for 8 weeks. But this time he followed his patients up for at least six months. Participants lost an average of 14 kilograms. Over the next 6 months they did not regain any pounds, but were still in the overweight or obese category. These patients had been diabetics for between 8 years and 23 years. Out of these patients there were 12 patients who had diabetes for less than 10 years. At 6 months follow-up these patients had no longer the diagnosis of diabetes. A 13th patient also lost the diabetes diagnosis at 6 months following the cessation of the 600-700 calorie diet. The relatively low average weight loss of 14 kg was enough to free the pancreas of any pressure that fat had exerted on its tissue interfering with insulin secretion. According to Dr. Taylor the important observation was the fact that the fat did not drift back to clog up the pancreas. This allowed the pancreas to secrete insulin normally again.

Professor Roy Taylor stated: “What we have shown is that it is possible to reverse your diabetes, even if you have had the condition for a long time, up to around 10 years. If you have had the diagnosis for longer than that, then don’t give up hope – major improvement in blood sugar control is possible.”

Dr. Taylor also said that a question he has often been asked was whether a patient who loses weight and loses the diagnosis of diabetes would remain diabetes free, when the weight is kept off. The answer to that question is “yes”. Dr. Taylor also said: “The bottom line is that if a person really wants to get rid of their Type 2 diabetes, they can lose weight, keep it off and return to normal.” 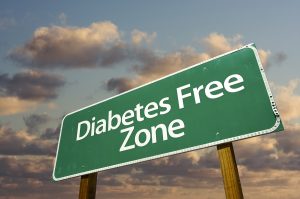 The encouraging news is that diabetes can often be cured, at least in 43% as shown here by an 8-week course of a 600-700 calorie diet. If you keep the weight down, you will not turn diabetic again. This is a remarkable finding how effective diet can be. It has to be added that patients should not attempt to embark of this program, unless they have discussed their plans with their physician. Regular monitoring of the blood sugar levels is also a must.