Creeping Eruption After A Beach Holiday

A young couple from Windsor/Ontario received an unwanted souvenir, creeping eruption after a beach holiday. They holidayed in Punta Cana, Dominican Republic.

Both developed itchy feet that got worse as they returned home after 1 week of holidays on the beach. The doctor diagnosed creeping eruption. The medical term is  “cutaneous larva migrans”. It is a parasite that circulates between dog excrements and human skin. In addition the same parasite also occurs  in cat excrements . Cats use a sandy beach as a litter box. Eggs in the feces develop into the infectious larvae (filariform larvae) after 1 to 2 weeks. These larvae enter the skin and burrow superficial tracks at a speed of a few millimeters to even a few centimeters per day.

Apparently the parasite is lacking the enzyme collagenase. Consequently it cannot penetrate the skin deeper and just migrates under the skin where it entered. It causes a lot of itching and inflammation.

The couple from Windsor/Ont. was told that they should receive the anti-parasitic medication Ivermectin, the “wonder drug”  of Japan. Originally developed in Japan, Ivermectin was available in the US, but not in Canada. The health authorities from Health Canada turned down a special requisition on the grounds that the condition was not severe enough. Hence the boyfriend’s mother drove to Detroit where she could get enough Ivermectin to treat both of them. 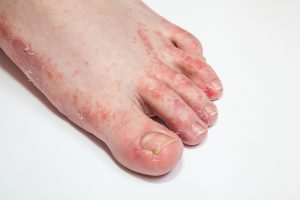 Creeping Eruption After A Beach Holiday

Parasites live in the guts of infected dogs and cats in the Caribbean. Some islands have started a program to get rid of wild dogs and cats to prevent parasitic diseases like creeping eruption. Maybe it is better to think preventatively and wear sandals on the beach. It is especially relevant for prevention to not lounge on the sand, but spread out a towel first. Furthermore, in order to avoid the parasite the towel needs washing after use. Beach resorts generally offer cots, and it is safest to use them. Most of all, plan to avoid beaches, which are natural beaches without any clean-up.

Resorts are mostly diligent about grooming the beach for their guests, but a beach away from the resort- no matter how pretty it looks- may not be the best option. The only safe zone is the wet sand where the ocean waves are lapping, as the ocean water does not allow the larvae to develop into the filariform larvae that penetrate the skin of the feet. Should you develop itchy feet and reddish, swollen skin, don’t delay seeing a doctor about your symptoms to get a diagnosis of your condition. If it is creeping eruption, get a prescription of Ivermectin, which is the latest drug to fight this parasite.