A randomized, double blind, placebo-controlled trial from Iran showed that CoQ10 supplementation improves metabolism. This is a recent publication  from April of 2017.  60 women with polycystic ovary syndrome (PCOS) were divided into two groups. One group received 100 mg of CoQ10 as a supplement once per day. The other group of 30 women was the placebo group.

After 12 weeks the participants who had taken CoQ10 supplements had a 24% decrease of their fasting blood sugar. Serum insulin levels showed a decrease by 7.8 pmol/L. In addition total fasting cholesterol levels were reduced  by 10%, the LDL cholesterol level was 15% lower. Researchers compared  the experimental group to the placebo group and obtained these values. Furthermore, insulin sensitivity had increased and insulin resistance decreased. Consequently the investigators noted that a simple supplement like CoQ10 had a significant effect on these women’s glucose metabolism and cholesterol metabolism.

What do we know about CoQ10?

CoQ10 occurs in a wide variety of foods, such as beef, soy oil, heart, kidney, liver and sardines. Peanuts and mackerel also contain it. It is an antioxidant and a coenzyme. As a coenzyme CoQ10 helps other enzymes to function better. It protects the heart and skeletal muscles.

CoQ10 has helped patients with heart failure. This is due to the fact that CoQ10 supports the energy metabolism in the mitochondria of heart muscle cells. It supports patients who have cancer (although it does not heal cancer), muscular dystrophy and periodontal disease. CoQ10 is also helpful for patients who take a statin drug. This link from the Mayo Clinic is somewhat timid in recommending CoQ10 against side-effects of statins. A trial of 200 mg to 400 mg CoQ10 daily for patients who take a statin drug will prevent some of the statin induced muscle pain. Some patients even can stay on CoQ10 alone and discontinue statins. CoQ10 lowers cholesterol similar to what statins do. If you are on statin drugs, you may want to discuss this with your healthcare provider. 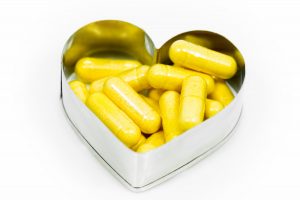 CoQ10 is effective in lowering fasting blood sugar and cholesterol ,using a relatively low dose of only 100 mg per day. Many people take 200 mg to 400 mg of CoQ10 per day as a supplement for heart support. It is very safe and readily available.  The scientific community is aware that CoQ10 supports the energy metabolism of the mitochondria of all body cells. There are a lot of mitochondria in the heart and in skeletal muscle. It is these tissues that benefit most from supplementation with CoQ10. One application is important to remember, namely patients who take statins for cholesterol control. The muscle pain, which is a side effect of statin drugs, can show a reduction with the help of CoQ10. Improve your cardiac reserves or cut down on side effects of statin drugs. Either way CoQ10 is a useful supplement.