1. A study from August 2015 published in the Journal of Clinical and Diagnostic Research found that CoQ10 supplementation reduced gingivitis significantly, a rather surprising finding. CoQ10 is a known stimulator of mitochondria, the energy packages within every cell. The August 2015 study involved 15 test patients and 15 control patients who all had gingivitis. After scaling and root planing the test group was put on CoQ10 supplementation while the control group only received the scaling and root planing. The groups were examined at baseline, at 1 month and after three months. The dentists measured what they call plaque index, gingival index (measuring the degree of gingival inflammation) and probing the depth of gingival pockets. In previous studies it was shown that CoQ10 doses of just 50 to 75mg daily could stop deterioration of the gums. The authors concluded that gingivitis precedes periodontitis. They also said that CoQ10 along with scaling and root planing could prevent gingivitis and thus periodontal disease because of reducing gingival inflammation.

2. A study from December 2015 involving 443 healthy old men and women from a rural municipality in Sweden showed beneficial effects of supplementing with selenium and CoQ10. Compared to the control group that did not take these supplements the experimental group had 49% less heart attacks from ischemic coronary artery disease and also 49% less mortality from cardiovascular disease. In another study where heart failure patients were followed for 2 years on CoQ10, 100mg three times per day versus a control group, there were significantly less heart attacks and deaths in the treatment group versus the control group.

3. The oral cavity can be a reservoir for colonization with potentially serious pathogens that can affect other parts of the body, like heart valves, coronary arteries or lung tissue as this study shows. Another study from July 2010 examined the issue of dental disease leading to cardiovascular disease. It came to the conclusion that there is evidence of a connection between dental disease and heart disease,when the same obscure bacterial strains are found both in infected gums and in blocked coronary arteries of heart attack patients. But there were also a minority of studies that found no correlation between gum disease and cardiovascular disease. 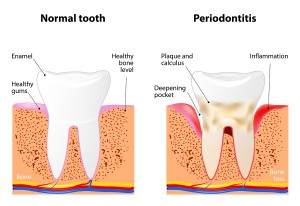