Are there concerns about stevia? This is the question as the food industry shows more interest in using this natural sweetener. An article in “Medical News Today” pointed out several potential concerns with stevia.

I will review this here and add other evidence I found in the literature.

Stevia belongs into the sunflower family. The leaves of Stevia rebaudiana are very sweet. The extract powder from this plant is about 200 times sweeter than table sugar.

Two toxicity studies are available at this point. This one is from the National Center for Food Safety Risk Assessment, Beijing, China. A battery of general toxicity tests involved rats that received stevia for 90 days. Observations concentrated on the effect of oral administration with a diet content of 1.04%, 2.08% and 3.12%. In conclusion, no adverse effects were noticeable.

Another 2017 publication from Iran examined the pharmacology and toxicology of stevia extracts. No toxicity was obvious, however most noteworthy stevia had positive effects on inflammation, diabetes, high blood pressure, cystic fibrosis, cancer, tooth decay and obesity. Furthermore, it had no teratogenicity( dangerous genetic changes) and showed no mutagenic or carcinogenic properties. It is good to know that there are alternatives to using sugar or unhealthy sweeteners when eating out.

Some concerns about stevia?

The story in “Medical News Today” mentioned a 2016 study to check for endocrine disruption. This in vitro bioassay involved sperm in tissue culture. Various concentrations of stevia extracts were added, and researchers measured progesterone production of sperm. Also, the ability of stevia extracts to block progesterone receptors on the sperm surface was used.

Normally sperm there are tests for the effect of progesterone that activates sperm motility. The other point is that adding a certain amount of stevia without real knowledge whether in vivo this amount would be relevant, comes across as rather arbitrary. 1 micro serving spoon, which contains 1/32 teaspoon, has only 45 mg (0.045 grams) of concentrated stevia extract in it. Let’s assume a 70 kg male consumes this tiny amount.  Is there really 25,000-ng/ml steviol in his semen as they tested for in the bioassay? It sounds like an exaggerated dosage, and it feels like a reminder to a quotation by the physician Paracelsus. He stated that “the dose makes the poison”. 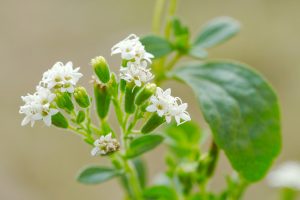 Older studies talking about kidney damage, of leading to gastrointestinal problems, low blood sugar or low blood pressure are no longer valid. New studies have refuted all of them!

Several laboratories have tested Stevia, a natural sweetener that comes from the stevia plant. Two studies tested for safety and toxicity regarding stevia extracts. They could not detect any toxicity. Another in vitro assay by another lab, presumably to test for endocrine disruption, came up without any damaging results. Unfortunately this assay was rather obscure, and the concentrations of stevia extract in this study were likely too high. This happened as researchers stacked the consumption of tiny amounts of stevia against concentrations  in their  test that were rather high.

Overall it appears that stevia extracts are safe to use replacing sugar in everyday life.