New research from the University of Cambridge showed that cold shock protein from cold water exposure may cure Alzheimer’s disease. Cold shock proteins were first detected in bacterial cultures when the temperature was dropped from 37 degrees Celsius to 10 degrees. Subsequently researchers detected these proteins also in mouse experiments.

In 2015 a Cambridge dementia research team investigated mice that became hypothermic. This was achieved lowering their body temperature by 2 degrees to 35 degrees Celsius. Normal mice produced a cold shock protein, called RBM3. However, Alzheimer’s mice and prion mice failed to produce the RBM3 protein in response to hypothermia.

Researchers could boost RBM3 protein levels artificially in Alzheimer’s mice and prion mice and this saved them from dying. They prevented brain cell deaths in mice with the help of the RBM3 protein.

The next question for the researchers of the University of Cambridge was whether cold shock proteins exist in humans. Professor Mallucci, head research woman of the Cambridge team wanted to find out whether the RBM3 protein existed in man. She explained that restrictive ethical guidelines made it difficult to get permission to make people hypothermic. She found a small group though of year-round swimmers who swim in winter in unheated open-air lidos in London. During the winters of 2016, 2017 and 2018 the winter swimmers submitted for blood tests. Researchers compared these results to  members of a nearby group of an outdoor Tai Chi club.

Dr. Giovanna Mallucci said that in babies have elevated cold shock proteins. In addition, heart and stroke patients treated with hypothermia showed an elevation of cold shock proteins. She stated that she is looking to develop a drug that can elevate cold shock proteins. Next researchers have to show that the RBM3 protein can indeed treat dementia. Dementia is a disease of the old. Even if the onset of this degenerative neurological disease could be delayed, it would have an important impact. Professor Mallucci added: “If you slowed the progress of dementia by even a couple of years on a whole population, it would have an enormous impact economically and health-wise.” 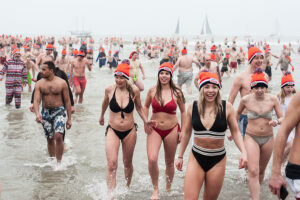 Research from the University of Cambridge showed that cold shock protein from cold water exposure may cure Alzheimer’s disease. The strongest evidence for this comes from mouse experiments. But Professor Giovanna Mallucci who is in charge of the research group showed very strong evidence that the RBM3 cold shock protein also exists in humans. She studied winter swimmers whose body temperature had fallen by 2 degrees Celsius, which elevated their cold shock protein. Controls consisted of a group of Tai Chi club members, who also exercised in cold winter conditions. They had no change in body temperature, and they did not have an increased level in the cold shock protein. In the future Professor Mallucci is looking to develop a drug that can elevate cold shock proteins. She hopes that this will be able to cure dementia.

The mouse model demonstrated a positive effect, however more investigations and research are necessary before this applies to humans.