Cannabis Is Useless For Pain Control

A new study from Australia reveals that cannabis is useless for pain control. And yet for years the cannabis industry said that cannabis would reduce pain! It was playing on the hopes of chronic pain sufferers. Here are the results of the Australian study. This review was based on the scientific paper from the Lancet.

1514 patients with chronic non-cancer pain were part of a study  between 2012 and 2014, and research followed the patients for 4 years. Cannabis use increased from 33% of the participants at the time of enrolment to 60% in the 4th year. Patients who used cannabis had a pain score that was 14% higher than that of non-cannabis users. Cannabis users also had a 7% higher generalized anxiety disorder compared to non-users. The researchers found no relationship between pain severity and cannabis use. Higher usage of cannabis did not reduce prescribed opioid use. Patients did not discontinue opioids with higher cannabis use.

Key points of the Australian Study

Discussion about the fact that cannabis is useless for pain control

Cannabis use for non-cancerous pain control has been a thorny topic for some time. I suspect that with the Australian study showing no objective effect of cannabis on pain relief the discussion will only become more intense. People will say that they take cannabis in addition of opioid medication for pain to relieve their anxiety and make life more livable. The problem with this is that the more drugs a patient takes, the more side effects are likely to occur. 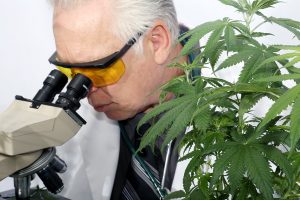 Cannabis Is Useless For Pain Control

Researchers conducted a study of more than 1500 chronic non-cancer pain patients in Australia to study the effects of cannabinoids. The result after 4 years was that cannabinoids are not effective in alleviating pain. In these times where more and more states and countries legalize marijuana this study questions a lot of things. Politicians and activists have been arguing that medical marijuana would be necessary for chronic pain sufferers. But the Australian study does not support their claim. Cannabinoids are not relieving pain, patients used them on top of the opioids that controlled the pain. There was no diminished use of opioids, as is often cited as a supporting point for cannabinoid use.

Consequences of this research

Basically, this study disqualifies all of the support arguments of the pro-cannabinoid activists. One of the potential negative effects of adding cannabinoids is the formation of cannabinoid-metabolites. These could potentiate the side effects of opioids leading to liver and kidney toxicity. It would be easier for the body to just deal with the metabolites of opioids alone. The fact that more medications will have more side effects does not represent a benefit to the patient.