Dietitian Carol Johnston has done several smaller clinical trials both with diabetics and prediabetics and apple cider vinegar. There was a mild blood sugar lowering effect on people with established diabetes. People with a tendency towards developing diabetes, so-called prediabetics had a much more pronounced effect on stabilizing blood sugars. But any vinegar can do the same, namely reduce insulin resistance.

Discuss with your doctor that you are taking apple cider vinegar or vinegar, as it will reduce the amount of diabetic pills you need to take. Dilute apple cider vinegar, 1 into 10 parts of water. Otherwise it is attacking the enamel of your teeth and the lining of the esophagus. In one study in humans it was determined that sugar absorption from the gut was not inhibited, but insulin secretion was suppressed for about 100 minutes following apple cider vinegar.  Overall there was an anti glycemic (blood sugar lowering) effects that could not be fully explained.

A Japanese study showed moderate weight loss over 3 months of between 2 and 4 pounds. This is only about 1/3 of a pound per week! If you use balsamic vinegar with oil in a ratio of 4:1 on salads, it is easy to built into your lifestyle. You need to also exercise regularly and stick to a healthy, well-balanced diet to make this work. Apple cider vinegar, science or fiction? Point 1 and 2 appear to be backed up by science.

Chicago dentist Alice Boghosian, a spokeswoman for the American Dental Association said: “You’re putting acid on your teeth, the last thing you’d want to do to promote oral health. What would be a healthier option is to brush your teeth twice a day for two minutes, with whitening toothpaste with the ADA seal. That shows it’s been tested to do what it’s supposed to do.” So, apple cider vinegar is not good for your teeth or dentures!

Dermatologist Dr. Marie Jhin, a spokeswoman for the American Academy of Dermatology stated that apple cider vinegar may dry out pimples, but it is not an anti-aging method. She felt that it is useful for treating mosquito bites that are itching. She said: “I do love it for bites, especially mosquito bites. It’s a very underutilized home remedy. If you have a lot of bites, put two cups in a full tub of water and soak. It will help with itching.”  Dr. Jhin also uses apple cider vinegar for the painful paronychia, an infection under the cuticle just proximally from the nail. She tells her patients to mix 25% of apple cider vinegar with 75% of water and soak the nails in it.

Forget wart treatments or treating lice. Apple cider vinegar will not come to the rescue. There are other more effective methods your doctor has for that.

Apple cider vinegar is effective against mold, but salt, lemon juice and hydrogen peroxide also have this effect and do not leave any odor behind. There is another limitation: don’t mix it with bleach or ammonia; this will form toxic chlorine or chloramine gases. All in all, use other cleaning agents!

For centuries people used apple cider vinegar to preserve processed meats and vegetables. Now people tend to use 5% distilled white vinegar, as this does not discolor fruits and vegetables. The FDA examined this as well and concluded: “Vinegar and lemon juice have potential as inexpensive, simple household sanitizers; however, possible negative sensory effects (color, odor) when used on produce would be a disadvantage.” Apple cider vinegar, science or fiction? Point 5 and 6 were more fiction, while point 4 contained some science.

Apple cider vinegar has been used by Hippocrates to treat infections.

He mixed it with honey, which is still popular to this day. But bacterial infections are now treated with antibiotics; the problem is to distinguish them from viral infections. Dr. Jennifer Shu, an Atlanta paediatrician and author of “Food Fights” said about treating sore throats with apple cider vinegar: “But diluting it and mixing it with other ingredients such as salt or honey might decrease any pain that the vinegar might cause.” There is one other aspect that is important: it can burn the esophagus, and a small amount could be inhaled when you take a breath, which could damage your lungs. It may be safer to just inhale steam from hot water to help a chronic cough.

Triglycerides and LDL cholesterol were diminished in rat experiments. Otherwise preventative action from apple cider vinegar regarding heart disease seems to be rather limited.

In Petri dishes apple cider vinegar could be shown to suppress leukemia cells significantly. But there is no clinical trial that would confirm a similar action in cancer patients. Apple cider vinegar, science or fiction? Point 7 and 8 belong into the fiction category. 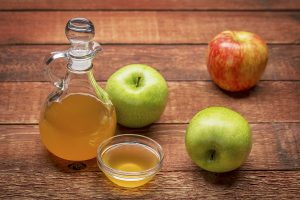 Apple cider vinegar has a long history going back to Hippocrates, the father of modern medicine. The mild anti-infective properties are not clinically important in modern medicine. But the mild effect on preventing diabetes and the minimal effect on weight loss are useful attributes. The anti-itch effect regarding insect bites and the effectiveness for helping paronychia around the nail folds to heal are practical applications worth remembering. Forget the use of apple cider vinegar as cleaning agent or as food preservative. We have better alternative methods today. You better see your physician before you self-treat a sore throat, cough, heart disease or cancer with apple cider vinegar. The hype is bigger than the effect! For these conditions it is better to seek out effective treatment.