Antidepressants During Pregnancy Could Cause Children’s Speech Problems

A new study has shown that antidepressants during pregnancy could cause children’s speech problems. Some pregnant women are depressed, but the physician must be careful to not just prescribe an antidepressant. Professor Alan Brown from Columbia’s Mailman School of Public Health, Columbia University, New York was the main investigator. His study was examining the effects of antidepressants on the offspring. The study involved 845,345 pregnant women and their offspring. The study used national population-based register data in Finland from 1996 to 2010. There were three groups of offspring:

All children were followed from birth to age 14. Several tests were performed like speech/language skills, academic skills and tests for motor disorders. The results showed that there was a 37% increased risk for group 1. Their mothers were the ones who took antidepressants during their pregnancy. In contrast, group 2 who had also depression were not treated with drugs. This risk was particularly significant during the middle of the pregnancy and towards the end of the pregnancy. This is the time when brain development in the fetus is most active. When group 1 was compared to group 3 there was an increased risk of 63% to develop speech problems.  What about the children of mothers who took antidepressants only during the early part of the pregnancy? They did not have speech/language problems. The message for physicians is that antidepressants during pregnancy could cause children’s speech problems.

None of the children who were under the influence of SSRIs in the womb developed scholastic or motor disorders up to early adolescence according to this study. Here is the link to the original study.

Antidepressants during pregnancy can also cause increased autism

A similar study from Montreal, Canada was published in December 2015. It showed that taking SSRIs during the second and third trimester of a woman’s pregnancy can cause autism. It will do so significantly as the rate of autism was increased by 87%. This was compared to children whose mothers did not take antidepressants. 145,500 pregnancies in the Canadian province of Quebec were examined between January 1998 and December 2009. The children were followed until the age of 10. In this study 4,700 children (3.2%) were exposed to SSRIs during their mother’s pregnancy. 46 of them developed autism.

Alternative treatment of depression during pregnancy

Mild to moderate depression can be treated effectively with behavioral/cognitive therapy by a psychologist or psychiatrist. Some patients may be more severely affected with depression or have psychosis with underlying bipolar disorder. These patients may require electroconvulsive therapy (ECT). This link reviews 169 pregnant women who were treated with this procedure.

Any case of depression during pregnancy should be referred to a psychiatrist. This specialist will treat the condition with the least amount of intervention while protecting the pregnancy. 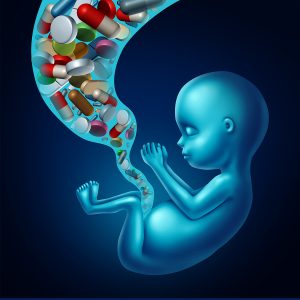 Antidepressants During Pregnancy Could Cause Children’s Speech Problems

A new study from Columbia University, New York has shown that taking antidepressants during pregnancy could cause children’s speech problems. This is particularly true when the SSRIs were taken during the middle and late pregnancy. A previous study had shown in addition that autism is another condition that can be caused by the same SSRIs, when given during pregnancy. The brain in the fetus of a midterm and end stage pregnancy is particularly vulnerable to the effects of these drugs. This is a time when the brain experiences rapid developments. SSRIs seem to be able to interfere with normal brain development. It used to be said that during pregnancy you should not take any drugs for the protection of the fetus. There is a lot of merit in that statement and physicians must carefully weigh risk versus benefits of any drug, particularly during pregnancy.