Alcohol Is Toxic To The Brain, Marijuana Not

A new study from the University of Colorado, Boulder found that alcohol is toxic to the brain, marijuana not.

First of all, 853 adults aged between 18 and 55 years and 439 teenagers between the ages of 14 and 18 underwent brain MRI scans. Also, at the same time the examiners recorded their consumption of alcohol and marijuana. Higher alcohol consumption had a connection with both, white matter and grey matter reduction, in adults. In teenagers heavy alcohol consumption showed reduction of grey matter, but not in white matter. Grey matter in the brain is the location of nerve cells. White matter consists of the axons through which nerve impulses travel. They contain a lot of the protective myelin sheath, which is the source of the white color.

Marijuana use showed no correlation to white matter or grey matter loss in the brain of adults or teenagers.

Based on these studies the authors concluded that alcohol is much more dangerous to the brain structure than the use of marijuana.

Other studies of toxicity of marijuana and cannabinoids

In a research paper by Kelly and Nappe investigated the toxicity of various plant-derived marijuana preparations and synthetic cannabinoids. Most noteworthy, they found that the synthetic variations of marijuana were dangerous. In addition, they pointed out that these are the ones that are contained in street marihuana drugs (sold as K2, Spice, and Black Mamba). The message to marijuana users is to stick to the original plant-derived marijuana contrary to the synthetic drug, as otherwise there will be toxic reactions to the brain.

Some physicians recommend to use marijuana for period cramps. Here is a link where I discussed this further.

General effects of marijuana use

The National Institute on Drug Abuse has compiled data on what marijuana is, how it affects the brain and what other health effects it has. It is a useful guide to understand the effect of marijuana, going beyond the structural effect on the brain. It often takes special studies to measure psychological effects. 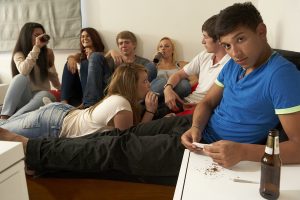 Alcohol Is Toxic To The Brain, Marijuana Not

In conclusion, research found marijuana use to be less toxic to the brain compared to drinking alcohol. But marijuana has other effects on the brain that are not obvious on MRI scans. These effects are far from harmless! Hallucinations, memory loss, even a mild loss of the IQ can occur from regular marijuana use. These reviews come from the National Institute on Drug Abuse website. With the legalization in many US states this topic is more in the forefront. Marijuana use did not show structural brain changes in the study discussed here. But there are subtle toxic changes with chronic marijuana use. One other paper pointed to increased toxicity of synthetic cannabinoids. The original plant based marijuana is much less potent and is safer than these synthetic cannabinoids. The message is quite clear: If you choose to use marijuana, stick to the original form of it.