The newest development with regard to flu vaccinations is a universal flu vaccine. It is not far from its release. Up to this point doctors had to give their patients yearly flu shots that contained dead flu viruses with different strains. As the flu virus strains changed their types every year, vaccine manufacturers had to change the composition of the vaccine to catch up with the flu virus types that were circulating in the communities. I explained this and what you can do against the flu here.

Research on a new vaccine that is directed at the part of the flu viruses that stays constant from year to year is progressing well.

Researchers from Icahn School of Medicine at Mount Sinai in New York City, NY in collaboration with other research centers have completed a phase 1 clinical trial.

A phase I clinical trial to test a new flu vaccine

Two lead researchers, Prof. Peter Palese and Prof. Florian Krammer investigated a protein that is present on the surface of all flu viruses, called hemagglutinin. There are two components of hemagglutinin, the head, which changes from virus strain to virus strain. The other component is the stalk, which remains more or less stable between different virus strains.

The research team concentrated on developing a vaccine that is targeting the stalk portion of various flu viruses. The name of the  protein is a chimeric hemagglutinin. The researchers used this to manufacture a vaccine.

In a phase I clinical trial the researchers tested several vaccines with various chimeric hemagglutinin proteins in healthy volunteers. The question was which vaccine created the strongest and most diverse antibody response against a broad range of flu viruses.

Prof. Florian Krammer commented: “The vaccine induced a broad antibody response, which was not only cross-reactive for currently circulating human influenza virus but also to avian and bat influenza virus subtypes.” Prof. Krammer added: “It was surprising to find that the inactivated formulation with adjuvant induced a very strong anti-stalk response already after the prime, suggesting that one vaccination might be enough to induce protection against pandemic influenza viruses yet to arise.”

Prof. Krammer said that the development seems to go in the direction of having a single vaccine against the flu in a life time. Until such time you still need yearly vaccinations. At the end of 2019 there will be the completion of another study. This included more subjects and more data about the diverse flu types that new vaccine is effective against.

The dream of replacing the yearly flu shot with a single lifetime shot is not new. Researchers attempted this before, but failed. The reason was that the antibody response was too weak or it did not protect against various flu types. Now researchers found that chimeric hemagglutinin proteins in the stem of various flu viruses are the best target for vaccine manufacturers. This is good for a vaccine that covers the vaccinated person for all types of flus, even new emerging ones. 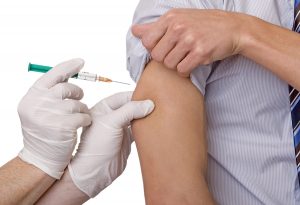 Physicians have long had the dream of developing a flu vaccine that covers for all the strains of flu that can circulate in a population. In the past there have been incidences where the vaccine that people received did not cover the circulating flu virus strains.

Now researchers have a new approach of vaccinating against chimeric hemagglutinin proteins in the stem of the flu virus. The stem often shows no change, even when the head of the virus changes in a new flu strain. A phase I clinical trial has already shown that the new vaccine is well tolerated. It produces strong antibodies against many different flu virus types. At the end of 2019 a larger study will be published, which will add more data. Within a few years we will see a new flu vaccine. We will have to only take this once in a life time. This will provide broad coverage, even for new pandemics.