A migraine headache is the second most common headache and occurs with an average frequency of about 12% in the general population.

Women outnumber men in the U.S. by a factor of 3 to 1 with migraines. There is a genetic factor as migraine sufferers’ family members are getting migraines about 3-fold more often than the general public.Newer insights into hormonal connections point to the fact that often migraine sufferers are in an estrogen dominant state (Ref. 12 and 13). With estrogen dominance there is a dysbalance between estrogen production and progesterone production. For instance, many women who develop fibroids miss their ovulation and as a result can have fertility problems (no corpus luteum developed in the ovaries). The reason for infertility, fibroid development and the development of migraines in some migraine sufferers is the lack of progesterone in the second half of the cycle. Xenoestrogens (such as pesticides, artificial hormones such as Provera, the BCP etc.) can also function as a contributor to the estrogen load as a woman’s estrogen receptors will have a partial fit with them. The resulting hormone dysbalance is what can trigger migraines in migraine sufferers. It is triggered by the relative lack of natural progesterone. This may also be the reason why migraines are much more common in woman than men. On the other hand Dr. S.A. Dugan has done hormone studies on both male and female patients with migraine. He found that both sexes are often also suffering from fibromyalgia, chronic fatigue syndrome, and lipid disorders including high cholesterol, sleep disorders, gastrointestinal problems and depression. When hormone tests were done on these patients the majority had what Dr. Dugan called steroidopenia (low levels of estrogen, progesterone, testosterone, DHEA). This is discussed in more detail under Ref. 14.

Migraines present in 85% without an aura (formerly called “common migraines”) and in 15% with an aura (formerly called “classic migraines”). An aura consists of changed behaviors such as pacing, yawning, craving for certain foods, lethargy, depression or mild euphoria. These symptoms are separate from the migraine aura, which consists of neurological symptoms such as visual symptoms that come on 1 or 2 hours before the migraine headache starts and disappear about 1 hour after the start of the migraine.

These migraine aura symptoms are quite varied and can include numbness of the skin in a hand or a foot on the side where the migraine is and around the mouth area. Spotty eye field defects can also occur immediately prior to the onset of the headache and there may be deficits in language expression and pronunciation. Other such migraine aura symptoms can consist of double vision, ringing in the ears, balance problems, a gait abnormality and decreased levels of consciousness.

The actual migraine headache is on one side of the head, can last 4 hours to 3 days, is throbbing in nature, moderately to severe in intensity and is made worse by physical activity, light or noise. The patient is complaining of nausea and might be vomiting with a severe migraine. In a small percentage of patients a more severe form of complicated migraine (or “migraine with prolonged aura”) can develop where the patient has prolonged symptoms of a migraine aura for more than 1 hour, but usually less than 1 week. These patients should be investigated thoroughly by a neurologist as a small percentage of these patients can develop persistent neurological symptoms including a “migraine stroke ” (=a stroke like clinical picture) (Ref. 1, p. 2067). 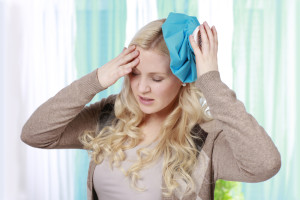 Medication that is used is quite different between attacks as compared to during an attack. During a migraine attack non steroidal anti-inflammatory drugs (=NSAIDs) and dihydroergotamine or sumatriptan, which stimulate serotonin receptors, are used. Drug dependency issues on narcotics has to be discussed frankly with the patient because of the danger of rebound migraines that are triggered by the continued use of narcotics. Sumatriptan can be given intranasally, but overuse and dependency on this medication also must be monitored by the physician and in males there is a higher risk for heart attacks as a side-effect of the medication. Prochlorperazine (brandname: Stemetil) can be given intravenously in the Emergency Room as a drip and can abort a migraine.

Between migraine attacks there is a number of preventatives that are effective. They consist of beta-blockers such as propranolol, metoprolol, timolol and others; NSAIDs such as ASA, naproxen or ketoprofen; calcium channel blockers such as verapamil or flunarizine; antidepressants such as amitriptyline.

Gabapentin is the latest medication that has been found useful in several smaller studies. Gabapentin(brand name: Neurontin) releases GABA in some parts of the brain and inhibits the NMDA pain receptors. Dr. Stephen Clarke, Clinical Assistant Professor in the Div. of Neurology of the University of BC/Vancouver/Canada, reviewed the use of gabapentin at a conference in Vancouver/BC in November 2004 (Ref. 10).

Other medication for headache prevention are the anticonvulsant gabapentin; the MAO inhibitor phenelzine and the serotonin stimulating drugs methysergide and cyproheptatine. Unfortunately many of these medications do not work 100% and there is a lack of good randomized studies to prove effectiveness.

Non-conventional, but effective treatment of migraines

In light of what I explained above with regard to a hormone dysbalance in women migraine sufferers, it is logical that Dr. Lee (Ref. 12 and 13) suggested to use 20 mg of a bioidentical progesterone cream applied to the skin during the second half of the cycle (day 12 to 26 of the cycle). After three months there is usually a significant improvement of the migraines. If there is only a partial response to this low dose of progesterone cream, the progesterone dosage can be increased temporarily to 40 or 50 mg per day from day 12 to 26 of the cycle for several months. If there is a response, treatments should be continued until menopause. An alternative to bio-identical progesterone cream is Prometrium (micronized progesterone) by mouth, 100mg or 200mg at bed time. Discuss this with your doctor.

It is important to include in the regimen of anti-migraine measures non drug regimens such as avoidance of triggering factors like certain foods (chocolate, red wine, certain cheeses and strong smells) or bright lights and noises. Consistent sleeping patterns and meal times need to be established. Counseling when emotional factors play a role, relaxation techniques like yoga, self hypnosis and biofeedback methods are all helpful as well. The more complex cases should be referred to a neurologist or even a multidisciplinary headache clinic.

Since Dr. Dzugan published the results of treating migraine sufferers with the Dzugan method, it is important to look at all of the hormones including steroid hormones as mentioned above. By using bio-identical hormones any hormone deficiency is rectified and hormone levels are repeated. Dr. Dugan found that after 9 to 12 months at the latest almost all of his patients were migraine free and lost all of the other accompanying symptoms.

12. Dr. John R. Lee, David Zava and Virginia Hopkins: “What your doctor may not tell you about breast cancer – How hormone balance can help save your life”, Wellness Central, Hachette Book Group USA, 2005. On page 256 and 257 Dr. Lee describes how progesterone can be used as a cream to treat PMS.