Cholelithiasis, which is also commonly termed “gall stones” usually develops over a long period of time. About 20% of U.S. Citizens over the age of 65 have gall stones and every year more than 500,000 have a gall bladder surgery (cholecystectomy).

The following are risk factors to get gall stones: first of all obesity, furthermore being of female sex, in addition older age, another risk are genetic factors (North American Indian descent, positive family history of mother or father having had a cholecystectomy) and finally, being on a Western diet.

There is a delicate balance between the bile salts that attempt to keep the cholesterol in bile in solution and the cholesterol wanting to precipitate out when it is being concentrated inside the gallbladder. The Western diet contains something, which interferes with this delicate balance, but not everybody is sensitive to these factors. We do not know the details of these mechanisms. However, we know from long term studies that there are initially very small seed like crystals of cholesterol, which in time grown by forming layers of more cholesterol around it until there are only a few larger stones left after years and years of growth.

This process can span over 15 or 20 years, possibly without any symptoms. Thomas et al. in London/England (Ref.3) have published evidence that constipation leads to overgrowth of anaerobe bacteria, which produce a type of bile acid that finds its way into the bile of these patients and furthers this process of precipitation of cholesterol. Further research found that deoxycholic acid (the name of this bile acid) is the common denominator in patients with cholesterol gallstones. All of the samples of bile from such patients showed a high content of this bile acid and in the stool samples showed a high growth of these anaerobic bacteria producing this bile acid as well. This confirms what many researchers have postulated for years, that constipated and obese patients were at a higher risk to develop gallstones.

There may be no symptoms for a long period of time in the process of gall stone formation. Symptoms tend to only occur, if there is obstruction of bile flow against a stone that is migrating through the narrow cystic duct or if a stone gets caught in the narrow passage just before it comes to the ampulla of Vater at the insertion into the duodenum (for bile duct anatomy see this image).There is another passage problem between these two points, namely when the common bile duct goes through the pancreatic tissue. However, there is a lot of variation from person to person, as in some people the common bile duct does not run through the pancreatic tissue. 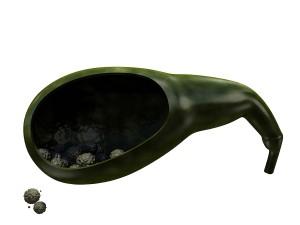 Another reason for symptoms from gall stones is, when infection or inflammation sets in. This can also lead to obstruction to the cystic duct and produce identical symptoms of colicky pain.

There might be a couple of weeks or months of non-specific symptoms following fatty meals, where right upper abdominal pain as well as fullness, belching and bloating occurs transiently. On some days it may occur, but on others it may not. Finally there is the big full blown attack where colicky pain (biliary colic) is present for several hours, perhaps even leads to a period of hospital stay where tests are performed. Pain is usually in the mid upper abdomen (epigastric area) as well as deep in the right upper abdomen and radiates into the right lower shoulder blade. The gallbladder colic is not like labor pain, but rather is a steady progressively increasing pain, which then reaches a plateau and then slowly decreases and disappears. This process lasts up to about several hours. Mostly there is no fever associated with this unless infection is part of the process.

The main test for depicting stones (in medical circles known as “calculi”-has nothing to do with mathematics) is the ultrasound test. This has a high accuracy and will show stones and the size of bile ducts. It has replaced the older oral cholecystography, an X ray study, which was the common test years ago. When it comes to documenting bile duct tumors, this latter test is still being done. Once stones are detected, the clinician has to attempt to judge the clinical relevance of these findings. 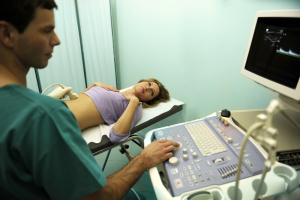 The “gallbladder flush” that does not work

You may have heard about a theory that one could “flush out” gallbladder stones with a “gallbladder flush”. People swallow a mixture of olive oil and lemon juice or some other concoction and observe their stools for the next few days for roundish structures that are interpreted to be gallstones that passed the natural way.

One of my patients with gallstones

One of my patients was convinced that she had passed all her gall stones in that way and that she did not need the gallbladder surgery that I had suggested. I asked her what it would take to convince her to have the surgery. She said first a repeat ultrasound study that would prove that her gallstones were still there; secondly another gallbladder attack to convince her that she was not cured from the stones. The repeat ultrasound was identical to the first one. A few weeks later she had another gallbladder attack that precipitated a  hospital admission. Needless to say that she had her gallbladder surgery shortly after, which cured her of her problem.

What was she passing in the stool, which looked to her like gallstones? The answer is “fecaliths”, old stool pebbles that resemble gallstones. They get caught in some pockets of the colon until they are freed by such a concoction or simply by chance.

The human need for magic and myths in medicine is centuries old and will live on despite computers and advances in technology.

Another useful statistic to keep in mind is that out of a group of asymptomatic patients with documented gall stones there is a cumulative chance of about 2% per year that they will develop symptoms (Ref. 5). Most surgeons then develop a clinical practice based on these observations that only symptomatic patients get a cholecystectomy done, but only when the acute symptoms have subsided (between gallbladder attacks).

Even when the gallbladder is removed, there can be new stones that form in the bile ducts. This can be a potentially very dangerous situation as the stones can get infected leading to a local infection of the common bile duct (called “cholangitis”). It is dangerous as it can lead to a systemic serious infection (sepsis). Other complications are pancreatitis and chronic liver disease. Bile is feeding any infection such as gram negative bacteria and for this reason the surgeon will want to do an early endoscopic or surgical decompression after antibiotic therapy has been initiated. Usually after this procedure there is a swift recovery.