About 50 million people in the U.S. suffer from hypertension, so what are the causes of high blood pressure?

It is more common among women than men, but is even more common among black women, particularly after the menopause and beyond age 65. There is a public health crisis going on, as Ref. 2 describes that 75 % of the 50 million Americans who have hypertension are at risk for getting cardiovascular complications such as heart attacks or strokes.

There are deficiencies in diagnosing and treating hypertension as it is painless and people who have high blood pressure are not aware they have it, as they do not measure it themselves or have it measured by a health care provider.

The authors describe that many physicians are not aware of the 2004 guidelines from the Joint Committee (Ref.1) and as a result they use old outdated much higher cutoff points before treatment is instituted. There are also problems with under- and over treatment according to Ref.2. Hyman et al.(Ref. 3) reiterates that many physicians have much higher treatment thresholds than the Joint Committee’s 120/80 target, which leads to under-diagnosing hypertension and unwillingly putting patients at risk by not treating them. Also, these authors observed that once treatment has been started, patients are not treated adequately to normalize their blood pressures.

Most people (85 to 90%) with hypertension have “primary hypertension”, which is also known under the name “essential hypertension”. This term is used to indicate that we do not know the cause of why these patients have high blood pressure. The other group(10 to 15%) is said to have “secondary hypertension”.

The causes for the high blood pressure in this group is disease of the kidneys (where the powerful renin-angiotensin mechanism is activated), pheochromocytoma, hyperthyroidism, hypothyroidism, primary aldosteronism, Cushing’s syndrome, renovascular disease and coarctation of the aorta. Most of these conditions involve some form of powerful hormone changes or some structural changes in the kidneys. Several chronic kidney diseases are associated with hypertension such as glomerulonephritis, pyelonephritis, obstruction of the ureter from a kidney stone, congenital polycystic kidney disease and connective tissue disease affecting the kidneys.

Despite what I said above about primary (essential) hypertension quite a lot is known about this entity. Many authors now think that there is not one cause, but a combination of various factors that interact, all leading to hypertension.

Such known factors are: stress leading to overstimulation of the sympathetic nervous system, sodium retention from overindulgence of salt and hereditary factors poorly understood so far. Absence of such substances as prostaglandins and others, which are found in kidney tissue and have a relaxing effect on arterial walls, can also lead to hypertension. This likely may be the major mechanism for hypertension in the case of chronic kidney diseases mentioned under secondary hypertension, where the tissue of the kidneys gets damaged. The lack of these arterial wall relaxing substances allows the other powerful artery constricting substances, renin and angiotensin as well as epinephrine and norepinephrine, to get the upper hand. A reduced sodium diet has been shown to have a preventative effect against high blood pressure. 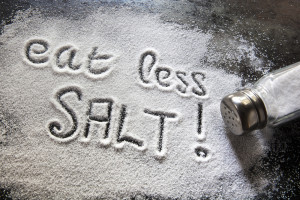 Dr. Nathan Bryan (Ref. 10) presented evidence from the literature about the basic research into the causes of high blood pressure, heart attacks and strokes. He also talked about this at the 19th Annual World Congress on Anti-Aging and Aesthetic Medicine in Las Vegas (December 8-10, 2011). The common denominator in these illnesses is a lack of nitric oxide (=NO) production in the arterial walls of these patients. NO is a gas and this is what diffuses through the lining of the arteries and relaxes the surrounding smooth muscle cells, thus widening the arteries and lowering the blood pressure. This in turn will prevent hardening of the arteries, heart attacks and strokes. Nitric oxide is also formed from green leave vegetables, such as spinach, kale and lettuce, which contain natural nitrates and nitrites. The bacteria in the mouth and stomach metabolize the nitrates into nitrites and nitric oxide, which is absorbed in the small bowel. Too much fat, too much starch and sugar will interfere with the formation of NO. Exercise and relaxation will lead to more NO production in the arterial walls.

1. “The seventh report of the Joint National Committee on Detection, Evaluation, and Treatment of High Blood Pressure, 2004.”