Before the advent of penicillin ” strep throat” was the common cause of heart valve disease.

It often takes about 10 to 15 years before this becomes apparent. About 20 to 30 years after the strep throat the heart valve would be so worn out or stenosed that it needs surgical replacement . Since the advent of porcine valves in the early 1980’s such open heart surgery has become a lot safer in the hands of university hospital cardiovascular surgeons because of new technologies. Heart valve replacement surgery with a porcine valve is the standard treatment now. The long-term survival has improved tremendously, often with a normal life expectancy.

Nowadays we see much less mitral valve disease because streptococcal tonsillitis is being treated with antibiotics thereby preventing the ugly scenario described above (Ref. 2, p. 1643).

Briefly a few words about mitral valve prolapse. This is a condition where one of the leaflets of the mitral valves is not closing properly and a small amount of blood goes backwards when heart muscle relaxes between two beats. This condition is found frequently in patients with Marfan syndrome. 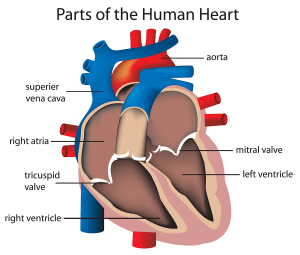 Usually the patient is quite aware that there are some “palpitations” (rapid heart beats) and they often will feel anxious when they notice this. Usually the doctor will order an echocardiogram as a baseline and will repeat this every couple of years. If there is no deterioration, then further observation is usually considered safe. However, there have been a few cases of sudden death which makes it in my opinion mandatory that these patients are followed at intervals to spot any more progressive deterioration. One of the known complications is a rupture of one of the papillary muscles that controls the movement of the leaflet of the mitral valve. This usually is an indication to do cardiac surgery on an urgent or emergency basis to repair the damage or replace the valve with a porcine valve. However, the majority of cases can simply be followed and may never need surgery. A cardiologist should see the more complicated cases.