Stage I requires surgery with microsurgery or laser surgery, but can alternatively be treated with radiotherapy.

The more bulky the cancer, the less successful radiotherapy will be. In this case surgery might be combined with radiotherapy. Stage II is treated with radiation. Stage III has to be treated with radical surgery consisting of a “total laryngectomy”. This is at first a shock to the patient, but it is the only way known to lead to acceptable longterm cure rates.

In stage IV a total laryngectomy is combined with radical neck dissection to remove as much as possible of all of the visible cancer tissue. Postoperatively radiation is given to eradicate the remaining cancer cells. The patients following stage III and IV surgery will need speech rehabilitation as they no longer have a voice box. However, prior to surgery the details of the surgery and the consequences to speech has already been explained. After surgery these classes and individual instructions continue. Patients are taught how to use an electrovibratory device for speech production, which will enable them to produce a speech similar to a computer voice generated from the vibrations of the upper air ways using this device. With proper training and eventual acceptance of their condition emotionally these patients can adjust remarkably well. Here are the average 5-year survival rates:

These survival figures are not as good for supraglottic cancer. The 5-year survival rates are about 10% to 15 % lower on average.

With newer techniques debulking surgery and radical laryngectomy is done after initial chemotherapy and next followed up with radiotherapy, and if necessary with chemotherapy. With this approach 5-year cure rates of 60 to 65% for stage III and IV have been achieved in some centres (Ref.1 and 2). Most specialists favor surgery for stage III larynx cancer, but Jackson et al. (Ref. 3) showed that with radiotherapy excellent survival without recurrence can be achieved (65% at 5 years). However, there can be significant side effects from the therapeutic procedures such as esophageal strictures from the radiotherapy etc. Following a radical laryngectomy a tracheostomy tube is inserted that connects the outside with the trachea directly through a tracheostomy tube. 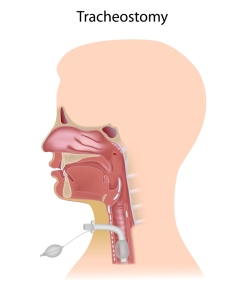 As has been emphasized above, throat cancer can be treated fairly aggressively and hopefully gets diagnosed from voice changes early on. This way a diagnosis should be possible in stage I with 5-year survivals of 90%. The more advanced the throat cancer is at the time of diagnosis, the more aggressive the therapy must be, as experience has taught us with stage III and IV cases, involving two or three treatment modalities in combination.

Emphasis must be put on prevention as earlier mentioned. This includes smoking cessation (use of self hypnosis cassettes ), moderation around alcohol consumption, avoidance of voice strain and avoidance of exposure to known airway irritants and radiation. Chronic throat infections must be attended to by the ENT specialist as there could be premalignant polyps that are the cause of it and that can be taken care of through minor surgery. Even the “disaster” of a total laryngectomy is no death sentence. The grief can be worked through, depression can be treated and post-laryngectomy classes can help the patient find a new life after this radical surgery.