We know a lot about germ cell tumors and testicular cancer, also about the origin of testicular and germ cell cancer from “developmental embryology”. This is a  a subspecialty of anatomy and over the centuries an enormous wealth of knowledge has been accumulated, which is not widely known.

Germ line tumors are the cancers that are made up of the identical tissue as testicular cancer. They are derived from tissue that originally was located in the embryo between the lower cervical spine and the upper sacral area in the midline of the embryo and is a part of the yolk sac called “germinal epithelium”. As the embryo develops further, this tissue migrates down the hindgut into the “urogenital ridge”. However, germinal epithelium can get sequestered along its long trip to the testicles and the cells that get trapped will eventually undergo malignant transformation later in the life of the man.

Such trapped cells and germ line tumors have been found in the pineal gland (at the base of the brain), the thyroid gland, the chest bone (sternum), the stomach, the space behind the abdomen (called “retroperitoneum”) and the prostate gland. 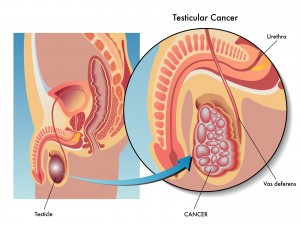 We know from this type of research that the developing testicular tissue descends finally through the inguinal canal into the scrotal sac fairly late in fetal life. If this step fails, cryptorchism is the end result as mentioned above. Only when germline cells locate in the testicles within the scrotum are they relatively resistant to malignant transformation. This is one of the cruel realities of life for a man.