After the initial examination by the doctor, the doctor likely will want to order a number of liver blood tests as well as some imaging studies.

This is necessary to confirm the suspicion of liver cancer and to rule other diseases in or out. Here is a list of blood tests that the physicians orders who just examined a patient with a possible liver cancer. The purpose of the tests is to establish the present liver function. These investigations  also confirm whether or not the constellation of the test results supports the diagnosis of liver cancer.

Other causes of liver disease

The physician wants to rule out other causes of liver disease such as pernicious anemia. This is due to vitamin B-12 deficiency. The traditional liver function tests (transaminases etc.) help discern whether there is an obstruction of a biliary duct within the liver. Alternatively cirrhosis of the liver, hepatitis or normal liver function may be present. 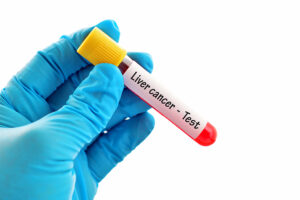 When hepatitis is present a further test can determine whether it is hepatitis B or C. Both of them have a higher risk of causing liver cancer.

Newer serological tests were developed with a specificity and sensitivity for liver cancer similar to the PSA test. The PSA test serves to screen for prostate cancer. Radio-immuno-assays for alpha-fetoprotein (AFP) are a promising first step. There are ethnic differences: 80%-90% are positive in Asian populations with liver cancer , but only 60%-70% are positive in liver cancer patients in the US and Europe. Other tests are more sensitive, but not specific enough. A combination of some of these tests with ultrasound investigations of the liver increases the sensitivity and specificity. It can reach 98% for liver cancer. This is not unlike prostate cancer, where a rectal examination and PSA test are in use for screening.

Specialists are ordering other diagnostic tests in the imaging department of the hospital or the X-ray clinic.

The first such test is an ultrasound of the abdomen, gallbladder and liver, which serves as an initial screening test. If this shows an abnormality in the liver, a CT scan of the liver shows more detail. Injecting contrast material improves the resolution of a CT scan.

When a radiologist injects contrast material into the “superior mesenteric artery” the so-called angioportography shows liver tissue detail. This artery supplies the liver with blood. An angioportography is very useful to look for the exact extent of the cancer within the liver tissue. It also shows any local metastases.

Alternatively, the physician can order an MRI scan. However, people with metal foreign bodies from prior injuries cannot undergo MRI scanning, but they can have CT scans. In the past arteriograms were done where the image of the pathological tumor vessels served as a diagnostic test. Occasionally this test is still done in special circumstances in cases where the surgeon plans a partial resection of the liver. A nuclear medicine liver scan is also available with Technetium 99m sulfur colloid in a hospital. A variation of this using a rotating gamma camera allows for better imaging with spatial orientation, called single-photon-emission CT (=SPECT scan).

These tests are all very useful to “round up the cancer”. But all the physician knows so far is that there is a biochemical abnormality on the blood tests and that there is a shadow on the various images of the imaging tests.

But there is no histological proof (meaning a cell test for proof of the presence of liver cancer) at this point to indicate that indeed liver cancer is present. As I pointed out in other cancer chapters, cancer is a histological diagnosis. For this reason, the physician takes a tissue sample and sends it to the pathologist for a definite tissue diagnosis. A percutaneous liver biopsy, an open biopsy or a laparoscopic biopsy are the ways how the physician obtains a tissue sample. However, it is wise to do all the other tests mentioned above first, as there could be profuse bleeding in a case where there is portal hypertension and where the blood is thinned due to missing clotting factors. What approach the physician will finally take to obtain tissue for a definite diagnosis of the patient’s condition depends to a large extent on these prior findings.