In the first place, causes of bladder cancer are multifactorial and it is a disease of the elderly with a peak at around 60 to 70 years. In the U.S. the male to female ratio is about 3 to 1.

Moreover, in the last few years more women developed bladder cancer due to the increase of numbers of women who started to smoke in the past decades. Significantly, the lag period for developing bladder cancer from exposure to cigarette smoke is 19 plus minus 3 years.

The relative risk ratio for both whites and blacks is about 1.6 every year of exposure. This means that in 5 years of smoking the risk is 8-fold in comparison to non-smokers to develop bladder cancer.

In general, occupational risks are common: exposure to aniline with dye workers, working with organic chemicals such as aryl amines, aniline, dye, rubber and paint leads to an increased risk of bladder cancer. Exposure to diesel fumes or exhaust from cars in urban areas has no link to bladder cancer. Specifically, chronic abuse of phenacetin in the past, particularly in the Swiss watch industry, was linked to bladder cancer.

Notably, there were initial suggestions in animal models that dietary sweeteners might promote bladder cancer development when carcinogens were given at the same time. But four well controlled studies in humans could not show any bladder cancer from cyclamate and saccharin. It is interesting that many people still hold on to the fears that were generated by the popular press generated from these poorly conducted animal experiments despite the proof that diet sweeteners are safe from a cancer perspective.

Cigarette smoking can cause bladder cancer

Certainly, the strongest association that is reported in the literature is that between cigarette smoking and bladder cancer. Indeed, study after study shows an association between the amount of cigarettes smoked, the duration of years of exposure and bladder cancer risk. The more and the longer people smoke, the more the carcinogens attack the very susceptible bladder lining leading sooner or later to changes in the cell structure.

The end result is what physicians call a “transitional cell carcinoma”, just a fancy name for “bladder cancer”. It is important to realize that 95% of bladder cancers are of this pathological type (Ref. 1 and 2). 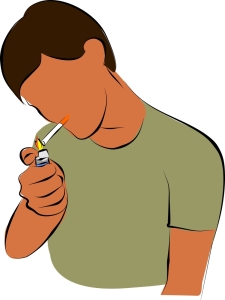 It must be remembered that chronic bilharziasis (also called “schistosomiasis”) leads to chronic bladder irritation and bladder ulcerations, followed by the development of papillomatous masses in the bladder. These often turn into bladder cancer. This is not a problem in the U.S., but is very common in other countries such as in African countries, also in Brazil, Venezuela, some Caribbean islands, China, the Philippines, Laos and Cambodia.

A minority of bladder cancer cases is caused by genetic factors, partially because of chromosomal breaks, chromosomal deletions or alterations. There are also familial genetic syndromes, where patients younger than 45 years of age come down with bladder cancer.

There is a suggestion that milk and vitamin A protects from the development of bladder cancer.