Fibroids  are benign tumors of the uterus, which consist of smooth muscle cells, the same material that the uterus is made up of.

There is a capsule around this tumor and often inside of it a degenerative process begins while the outer layers keep on growing. Alternative names for this condition are uterine fibroids, myomas or leiomyomas.

It is when there is bleeding into such a fibroid or when the fibroid has reached such a weight and size that it is pulling the uterus into different directions with positional changes, that a woman feels pain. Although a lot of patients are very concerned about whether the fibroid would turn into cancer, a development of cancer in a fibroid is extremely rare (called a sarcoma, when it does occur). Occasionally a fibroid as big as a large orange can develop over several years, which causes pressure symptoms and would eventually lead to surgical removal by hysterectomy. 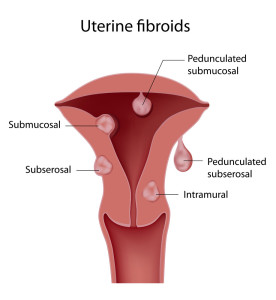 Fibroids are from estrogen dominance

Newer insights particularly when testing hormone levels, have shown that fibroids grow bigger under the influence of bioidentical estrogen, but shrink in size when under the influence of bioidentical progesterone. Also, with menopause fibroids often shrink in size. This has led to the concept that the cause for the development of fibroids likely is estrogen dominance, a dysbalance between estrogen production and progesterone production. Many women who develop fibroids miss their ovulation and as a result can have fertility problems (no corpus luteum developed in the ovaries). The reason for both infertility and fibroid development is the lack of progesterone in the second half of the cycle (Ref. 10 and 11).

Menstrual bleeding can be increased and more severe, particularly if a fibroid is right under the lining of the uterus (=submucosal fibroid) or inside the wall (=intramural fibroid). There can be urinary urgency, if a fibroid grows in front of the uterus and pressure is exerted onto the bladder. If the adjacent large bowel (sigmoid loop) or the rectum in the back of the uterus is pressured by an enlarging fibroid, the constipation and possible lower back pain (triggered from inside the pelvis) can be a problem. Fibroids often occur in multiples throughout the uterus and this can cause problems with pregnancies. Getting pregnant would not be affected, but recurrent miscarriages, premature labor, breech deliveries or other malpresentations cause concern and often lead to a higher cesarean section rate. Abdominal pain is common, mostly in the lower mid abdomen.

The doctor will do an intravaginal pelvic examination first and likely diagnose the fibroid first that way. Further tests will then be ordered such as an ultrasound, CT or MRI scan. This way it can be determined how big the fibroid is, how many fibroids there are, in case of several ones and whether they are submucosal, intramural or subserosal (on the outside surface of the uterus, but under the membrane that envelopes the uterus). Essentially there are medical means to minimize the impact of fibroids and then surgical techniques to remove symptomatic fibroids.

Dr. John Lee (Ref.10) describes that fibroids will often shrink when 20 mg of a bioidentical progesterone cream is applied to the skin during the second half of the cycle (day 12 to 26 of the cycle). After three months an ultrasound examination can be done to check the size of the fibroid. If it has not gained in size or has shrunk about 10 to 15%, this would be considered a good response and progesterone cream treatments should be continued until menopause when typically fibroids undergo atrophy (being absorbed). If there is only a marginal improvement, the progesterone dosage may have to be increased temporarily to 40 or 50 mg per day from day 12 to 26 of the cycle for several months.
As not all fibroids respond to this therapy, the gynecologist may have to remove the fibroid laparoscopically (typical recovery time 3 weeks versus the 3 months for a hysterectomy).

1. An asymptomatic patient does not need any treatment, just observation to make sure that growth of the fibroid(s) is within reason. Normally there is a very slow enlargement until menopause and then fibroids decrease in size. The smooth muscle cells of fibroids have estrogen receptors on them, which makes them grow while the ovaries still produce estrogen. After menopause that stimulus is taken away unless hormone replacement is considered and often fibroids reduce in size.

2. Using different hormone preparations, partially based on blood test, the gynecologist may want to consider a trial of hormone therapy with progesterone to see whether the bleeding abnormalities can be normalized. Unfortunately in many women this is not very successful and a surgical option has to be considered.

3. Surgical options are considered when pelvic pain is intolerable, when urinary or bowel complaints are a problem, when dyspareunia (painful intercourse) has developed or when uterine bleeding has become intolerable. In a couple where infertility or recurrent abortions have been narrowed down to a single large fibroid, a myomectomy (=surgical excision of the fibroid with preservation of the rest of the uterus) can be done.

4. In cases where multiple fibroids are present or where there is no more wish for children, the simplest procedure is an abdominal or vaginal hysterectomy, where the uterus (and often the ovaries) are removed surgically by the gynecologist. Prior to any of these procedures, there must be a frank discussion between the couple, with the gynecologist and with the family doctor to ensure the best decision is made in this particular case. Prior to surgery the specialist might decide that a brief course with a gonadotropin releasing hormone analogue would be useful to reduce the amount of bleeding and reduce the size of the fibroid. This hormone is now available under the brand name Synarel and can be taken as a nasal spray. However this is only safe for a shorter course of therapy as it has been shown that with longer than 6 month treatments bone density decreases (in other words osteoporosis develops).

5. Given the options above, most women will not need anything done but be followed with a yearly Pap test and pelvic exam. Most other women with unbearable symptoms will likely need a hysterectomy, if hormone therapy does not work.

The newest non-surgical, but very effective treatment comes from Israeli researchers who say that hysterectomies are no longer needed for most women: it involves ultrasound beams that are placed in an instrument surrounding the abdomen and focussing precisely onto the fibroid tumor(s). The patient who may have had pain prior to treatment will likely leave the treatment room feeling so good that she can return to work the following day! Here is a YouTube, which explains this in more detail.

6. An embolization technique (uterine artery embolization or UAE) where the blood supply to the fibroid is targeted is available: http://www.askdrray.com/uterine-artery-embolization-against-fibroids/

10. Dr. John R. Lee, David Zava and Virginia Hopkins: “What your doctor may not tell you about breast cancer – How hormone balance can help save your life”, Wellness Central, Hachette Book Group USA, 2005. On page 253 and 254 he describes how progesterone can be used as a cream to treat fibroids.