What happens when you cut out sugar?

Sugar causes obesity and heart disease, so you may ask yourself what happens when you cut out sugar? Recently a CNN review article described the sugar addiction. Research has determined which part of the brain is involved with sugar addiction. It also has sorted out the biochemical effects on the brain from a sugar meal.

Reward pathway in the brain

The brain has its own reward pathway that is used for various ways to get satisfaction. This link shows that the reward pathways in the brain. They consist of the ventral tegmental area, the nucleus accumbens, and the prefrontal cortex. These are anatomical names for different brain regions. The end result of the stimulation in the reward pathway is the release of the neurotransmitter dopamine. All these parts need to get stimulated before you feel a high. The intriguing part is that the same high can be triggered by completely different causes. It can be after ingesting some sweets, after sex, or after you won a sum of money in a lottery. The same circuit of excitement contributes to drug addiction.

In a small study involving 9 diabetic subjects a low calorie diet (less than 900 Kcal per day) without sugar was given. After 6 weeks a significant lower fasting blood sugar was noted. At the same time there was an improvement of the insulin producing beta-cell function in these subjects. Endogenous glucose production was also measured. This was decreased after 6 weeks of calorie restriction. Within another 6 weeks of calorie restriction the experimental values remained the same. The researchers concluded that it takes about 6 weeks for the body to get used to the new norm (no sugar intake and calorie restriction). From then on the metabolism remains stable.

People are often addicted to sugar, but may not realize they are. There has been a lot of research into this (see “The dark side of food addiction”). So, what happens when you cut out sugar?

Let’s say a person decides to stop eating additional sugar. There is a change of the reward center circuitry in the brain. This may result in feelings of anxiety, mild depression and feelings of craving for sugar or sweet food items. With regular low calorie food intake these temporary withdrawal symptoms disappear within a few weeks. As weight loss sets in this often is perceived as a reward. This will give a mini dopamine response and satisfaction. 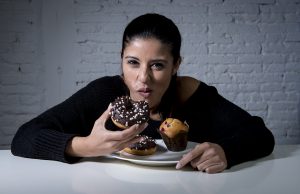 What happens when you cut out sugar?

What happens when you cut out sugar? Sugar addiction is much like a drug addiction. Even the reward pathways in the brain that lead to dopamine release are the same. The key for a person considering quitting all sugar is to be prepared. Have low-glycemic snacks ready for consumption. Protein rich snacks, and moderately fatty snacks and nuts will also help with sugar cravings. When weight loss has been achieved, you are used to a sugar-free diet. You will lose the sugar withdrawal symptoms. Life goes on, and a life without sugar still is full of satisfactions minus the addiction!