Vitamins Are Important For Mental Health

New research provided evidence that vitamins are important for mental health. A clinical trial at Western Sydney University in Australia determined vitamin levels in schizophrenic patients. They had their first episode of psychosis. Doctors tested for 6 vitamins and 10 minerals. The researchers found that the B vitamin folate, vitamin D and vitamin C levels were all low. This was particularly so during a first psychotic break of these patients. Rising levels of these vitamins had a connection with decreasing symptoms of psychosis.

The authors further noted that the literature reported previously that patients with chronic schizophrenia had low B and D vitamins. This newer research concentrated on newly diagnosed, young schizophrenic patients. In them the association of low vitamin B and D levels was more striking than in chronic schizophrenics.

In the 1950’s Dr. Hoffer treated patients with schizophrenia with Mega doses of vitamins, particularly with vitamin B3 (=niacin).  But he also replaced other vitamins along with it. He had observed that patients with schizophrenia were particularly low in niacin. His treatment schedule for schizophrenia was the following: 500 mg of niacin, 1 gram of vitamin C three times per day and B-50 complex twice per day (which also contains folate). It is interesting that research in 2018 supports what Dr. Hoffer was saying almost 60 years ago: schizophrenia has an association with vitamin deficiencies.

Others have described that in depression folate is often missing and antidepressant medication works better when the patient also receives folate as a vitamin supplement.  In addition, when the patient stops taking antidepressants once depression has resolved, it will rebound more likely in those who are folate deficient. This will not happen when folate levels are at normal levels. 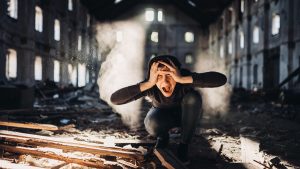 Vitamins Are Important For Mental Health

Acute psychosis in younger patients has shown a close association with folate deficiency, vitamin D deficiency and also with vitamin C deficiency. Before the patient receives high doses of antipsychotics that have significant side effects, the physician should first replace missing vitamins and only then administer antipsychotics. These medications also have a higher probability of helping patients when missing vitamins are replaced first. As explained, Dr. Hoffer knew about these facts in the 1950’s. He treated thousands of patients with schizophrenia successfully using mega vitamins at his office in Victoria, BC. This recent publication about vitamin deficiency in schizophrenics reconfirms what Dr. Hoffer said decades ago.

Link to vitamins and minerals.