“Suicide is more common in men than in women”; that as the result of a 10-year study of the World Health Organization (WHO) that has been released recently. The WHO study included suicide rates in 172 countries throughout the world. Worldwide 804,000 people killed themselves in 2012, which is a rate of 11.4 per 100,000 people. Males are twice as likely to kill themselves than females. In poorer countries the suicide ratio is 1.5 males to for every female.

The methods of suicide are generally by hanging, by poisoning or by gunshot. 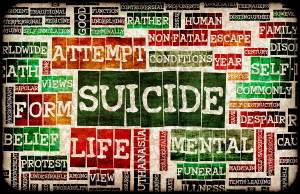 Among younger people aged 15 to 29 suicide is the second cause of death.

What are the reasons behind those numbers? The WHO study did not find one single factor why suicide happens; it is a rather a combination of things. There can be personal problems (e.g. break-up of marriage or mental illness), social, cultural, psychological, biological or environmental factors that contribute. Financial problems and stress contribute to the emotional downward spiral. Certainly economic pressures are one factor as the suicide rates were higher during the recent economical problems, but break-ups and recent joblessness were also big contributors.

Many Latin American countries had low suicide rates with Mexico at 4.1, Colombia at 5.3, and Venezuela at 2.5.

The WHO is hoping that this report will encourage governments put more efforts into mental health and suicide prevention.

In my opinion there must be more teaching in schools on suicide prevention. Any person, young or old needs to be seen right away by a mental health counselor or psychologist/psychiatrist to explore why depression may have started. Often suicide is the last act (an act of violence against oneself) when depression or schizophrenia is out of control. Cognitive therapy and behavior modification can help contain the internal fire that may be burning unrecognized by surrounding family members or friends. In some countries laws may have to be drawn up allowing health professionals to certify a person as a high suicide risk and institutionalize them against their will for a period of time until treatment with medication and psychotherapy has started to show improvement and the danger to self-harm has passed. Aside from the initial intervention it cannot be stressed enough that close follow-up remains a necessity.

More information is available at Suicide And Suicide Prevention