The researchers at Cambridge University used PET scanners to look at different groups of patients. They labeled the tau protein before patients underwent PET scans using a radioactive substance that specifically attached itself to the tau protein. They found that in different stages of Alzheimer’s disease there was first mild, then medium and finally severe presence of tau protein in the adjacent areas of the hippocampus where memory loss occurs. The researchers found further that the tau protein forms in one area first, and then spreads slowly through neuronal connections to other areas of the brain. In other words, the disease moves forward through “transneuronal spread”, similar to what was the case in mouse models of Alzheimer’s disease. The only difference is that in mice this transneuronal spread is progressing rapidly, while in humans, as the PET scan studies have shown, the progression is much slower.

The Cambridge researchers looked at 17 patients with another form of dementia. This form of dementia has the name “progressive supranuclear palsy”. It affects balance, vision and speech, but not memory. In these patients researchers found tau protein mainly at the base of the brain, but not throughout the brain. Furthermore, the process affected the area where the highest metabolic activity was in the healthy brain. In these patients the brain activity slowed down, but eventually after some thought and waiting the individuals came up with the right answer to a question. In contrast, in Alzheimer’s patients, due to the effect on the brain connections, there was a total loss of memory. 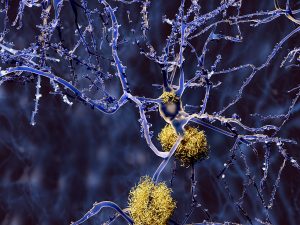 New research from the Cambridge University, where researchers examined Alzheimer’s disease by PET scanner, showed these findings. The tau protein, which causes inflammation in the brain, is what damages the memory centers. The process of loss of memory starts slowly because of an accumulation of a second protein, the amyloid beta protein. This protein does not damage the brain, but if it accumulates it is a sign that Alzheimer’s disease will eventually develop.

It is the tau protein development that causes the actual damage to the brain and makes the patient loose memory. The researchers also had a group of other dementia patients they examined. Progressive supranuclear palsy affects balance, vision and speech, but not memory. On PET scans there was a different finding, and they did not loose their memory. They had only a slow-down of thought processes that made their way around blocked areas of the brain. The key finding in this study was that in Alzheimer’s patients the tau protein leads to memory damage. This is a slow process that uses neuronal connections to spread throughout the brain. Hopefully the development of new drugs will be able to stop the tau protein from damaging the brain.