First of all, most people never think of the possibility of infection of contact lens wearers, when they buy contact lenses.

In the southeast of England infection with a rare amoeba that infects the cornea of the eye has become more common. From 2011 till now these rare infections have almost tripled. It has now become obvious that washing contact lenses in hard, lime-containing water is the reason for spreading the amoebae. These are the right conditions for the amoebae to multiply. 2 in 100,000 contact lens wearers experience the amoeba infection in the cornea each year in the UK. In comparison, in the US only 1 to 2 cases in every million contact lens wearers get Acanthamoeba keratitis infection. This is only 10% of the rate in the UK.

Irenie Ekkeshis is a 39-year old disposable contact lens wearer. In January of 2011 she woke up with a stinging pain in both eyes and light sensitivity. The treatment with antiseptic eyewashes was not successful. Her treatment took three years. Standard antibiotic drops did not work. She ended up with opacities of her own corneas. She needed two corneal transplant surgeries. Dr. Frank Larkin, a senior lecturer at the UCL Institute of Ophthalmology and Imperial College School of Medicine commented on this case. He said that the Acanthamoeba organism is very resistant to treatment, which often delays a cure by several years. Almost 8 years after the initial diagnosis Ekkeshis is still attending Moorfield’s Eye Hospital. Her ophthalmologist monitors her for problems linked to her cornea transplant.

About filters and reverse osmosis

Finally, most households do not have any filters to remove lime salts from drinking water. The end result is that these Acanthamoeba organisms find ideal living conditions in the lime of the water pipes and they end up in the tap water. People believed their hands were clean, when in reality there was contamination with the parasite. The next step is that the parasite ends up in the eyes where it has a high affinity to corneas. 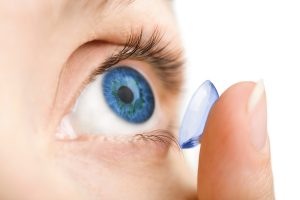 A tenfold difference between the Acanthamoeba keratitis infections in southeast England versus the US led epidemiologists to detect a parasite. It is Acanthamoeba organisms, a tenacious type of amoeba that likes limestone and lime dissolved in water. The epidemic in the UK originated from poor drinking water that was too hard and had a high content of this type of lime. As a result the amoeba organisms could multiply and cause problems for contact lens wearers. They thought that their hands were clean after washing, but there was contamination of their hands with the amoebae. The recommendation now is to use single wear, disposable contact lenses to minimize the probability of eye infection. Those who had Acanthamoeba keratitis with membranes developing over the corneas, often need cornea transplants to regain their vision.