Increase In Cesarean Sections Since 2000

A comprehensive review of section rates has shown that internationally there is an increase in cesarean sections since 2000. A publication to this effect came out in the Lancet. It is reviewed here by CNN.

The normal way a baby is born is through the vaginal birth canal. But with certain emergencies the physician in charge of the delivery may decide to end the delivery faster by doing a surgical cut through the abdomen into the uterus and removing the baby by a cesarean section. As far back as the 1980’s there has been an attempt by the obstetrical associations to keep the cesarean section rates low and encourage women to deliver vaginally. The reason is that there are less complications with vaginal deliveries, as long as the baby is not too large, so it will fit though the birth canal.

The study showing increase in cesarean sections since 2000

Comparison to the year 2000

What are the reasons for doing a caesarean section?

The most common reasons for an emergency cesarean section are: problems with the placenta or with the umbilical cord; if the baby’s heart rate changes suddenly indicating fetal distress; or the baby appears to be too big to fit through the birth canal. Another reason is breech presentation. These are legitimate reasons for a cesarean section. But sadly the convenience factor is playing a bigger and bigger role. 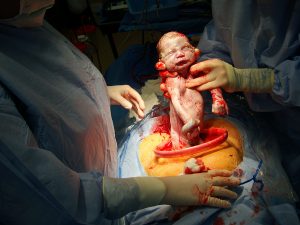 Increase In Cesarean Sections Since 2000

Cesarean section rates have been increasing significantly in most countries around the world. Most obstetrical authorities say that a rate of 10 to 15% of cesarean sections would be justified by true emergencies. These could be cord prolapse, premature separation of the placenta, fetal/pelvic disproportion (baby’s head too large) and fetal distress leading to heart beat abnormalities. Physicians expect these types of complications leading to a cesarean section to remain constant.

Vaginal deliveries have their risks, but in cesarean sections there are even more, like infection of the wound, scarring, and risks due to the epidural or general anesthetic.